Do You Still Own Stuff You Upload To Google Drive?

Fresh on the heels of Google‘s Dropbox-like remote storage service, Google Drive, is a furor over what the fine print in the service’s user agreement means for users’ intellectual property rights over their own work. Should you be worried? 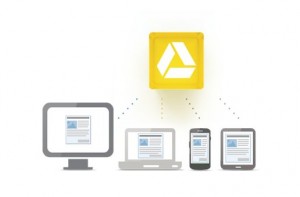 Cloud computing has stirred up issues that weren’t relevant to most people when the majority of personal files were stored locally. When you upload a document – or all your documents, or years of photography, or anything else – to a storage service like Google Drive, you hit the ball out of your court. Another entity has its hands on your files, at least in principle, and what they can do with them rests with the license you agreed to when you signed up for the service.

The controversy has been fueled by two similarly contradictory statements in Google’s terms of service. CNet’s Zack Whittaker rounded up the terms of service for Dropbox, SkyDrive and Drive – and found that while the former two clearly let the uploader retain rights to her own work, Google leaves itself considerable leeway:

“When you upload or otherwise submit content to our Services, you give Google (and those we work with) a worldwide licence to use, host, store, reproduce, modify, create derivative works (such as those resulting from translations, adaptations or other changes that we make so that your content works better with our Services), communicate, publish, publicly perform, publicly display and distribute such content.”

That’s seemingly in tension with the first sentence of the same section, which reads: “Some of our Services allow you to submit content. You retain ownership of any intellectual property rights that you hold in that content. In short, what belongs to you stays yours.”

So what’s the deal? It’s vanishingly unlikely that Google plans to mischievously steal your ideas and claim credit for them, but in light of the company’s ongoing privacy image woes, it’s worth asking why they’re keeping what they’re allowed to do with your data so vague. Google probably understands that, because they’ve scrambled to downplay the significance of the section.

“Google only needs to access your files in order to deliver them to your Google Drive account on the web, phone, tablet, etc,” a spokesperson told Business Insider. “It’s very limited.”

Some commentators have pointed out that oddly enough, Dropbox – a direct competitor to Drive, no matter how you spin it – made a very similar gaffe last summer, raising the intriguing possibility that nobody at Google bothered to read up on similar services prior to launch.

Or, perhaps, Google employees see Google as being held to a different set of standards than other tech companies, even when comparing similar products. That possibility, in and of itself, should give us pause.