I wrote recently about an ostensible religion, Kopimism, which holds filesharing as a sacred act. Now, in a move that a faith leader called “unavoidable,” two congregants were recently joined for the first time in marriage, during a Kopimist ceremony.

“Hopefully, they will copy and remix some DNA-cells and create a new human being,” wrote Kopimism founder Isak Gerson. “That is the spirit of Kopimism. Feel the love and share that information. Copy all of its holiness.”

The service, which took on a slightly ad-hoc feel, incorporated elaborate historical dress and an officiary who wore a Guy Fawkes mask – an accessory that has taken on oncreasing political and social meaning after it was co-opted from Alan Moore’s graphic novel V For Vendetta by activists associated with Anonymous and other online collectives. 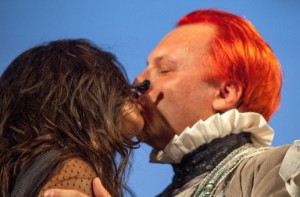 The marriage, between a Romanian woman and an Italian man, took place late last month in Serbia.

“We are very happy today,” Gerson wrote. “Love is all about sharing. A married couple share everything with each other. ”

Kopimism holds as sacred the free dissemination of information, even in violation of intellectual property right law. It sounds like a parody — akin, perhaps, to Pastafarianism, or the Church of the Subgenius – but spokespersons for the faith say they are absolutely sincere, and that the group represents new philosophies and possibilities engendered by technology.

Filesharing, and the legal issues associated with widely-available copyrighted material online, have become a hot-button political issue in recent years, with a number of high profile attempts to crack down on online privacy, including the controversial SOPA and PIPA, sparking intense discussion and criticism in the past year.

“This church exists on the as a legitimate religion,” a spokesperson for Kopimism in the United States told Tech.li, in an email message. “It expresses the deeply held religious beliefs of its members that data is the metaphysica building block of our existence, having no owner or keeper. Additionally, as a latent social function, Kopimism contrasts the widely taken-for-granted viewpoint that ideas and electronic content can and should be treated like physical property.”

Now the satellite’s confused
‘Cause on Saturday night
The airwaves were full of compassion and light
And his silicon heart
Warmed to the sight of a billion candles burning
Oh, oh, oh, the tide is turning
#BitTorrent#filesharing marriage#filesharing religion#Geektastic#Kopimism#Kopimist#Missionary Church of Kopimism#Privacy#privacy#Tech Policy#Technology