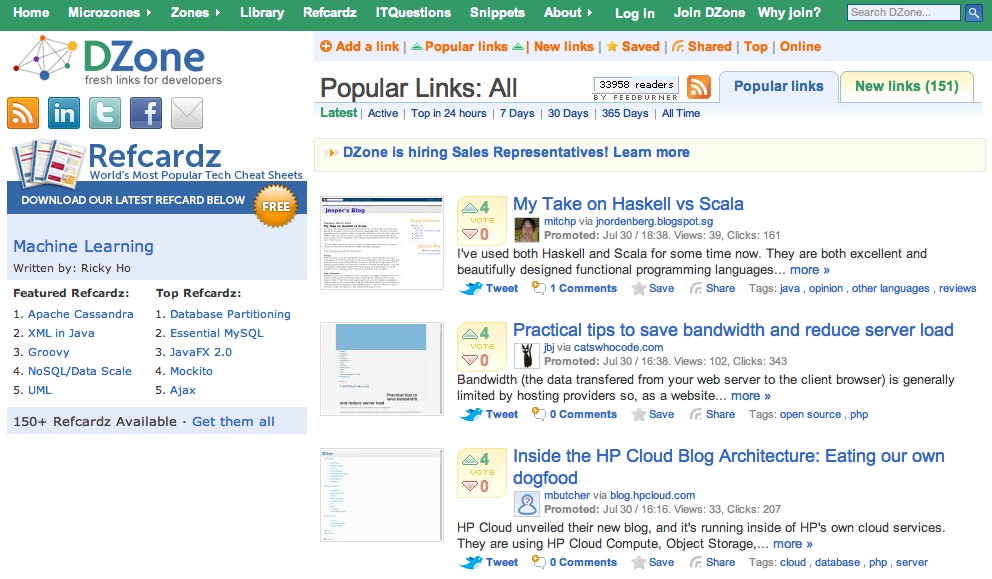 North Carolina startup DZone has created an online space for programmers to share tips and information about their tech trade. Their main service is a Reddit-like link site featuring coding reference cards, blogger content, podcasts, and other programming-relevant links from around the net. The startup has begun offering a new enterprise Q&A platform called AnswerHub, combining the best features of wikis forums, search engines, and social networks into a single service.

DZone was founded by CEO Rick Ross and CTO Matthew Schmidt in 2006. Before the dot.com crash at the turn of the millennium, Ross had created a community site for developer-focused news and information in his spare time. The founder eventually decided that the idea was strong enough to grow what was once a hobby into a profitable business. According to the company, DZone’s most recent product has grown from the startups’ roots in online community creation.

“This expertise and history in community building led us to what makes AnswerHub so successful,” said the company. “We experienced a lack of information sharing within our own organization and wanted a tool, a place to find and share resources. The Q&A model has useful applications in almost any industry, allowing us to remain relevant while staying true to our original roots through this new venture.”

Ross was living in New York City’s upper east side before he began the programmer-focused startup. Leading up to the birth of their second child, Ross and his wife decided to relocate to the North Carolina’s Research Triangle. The location turned out to be a “great choice” for the founder, who continues to be impressed by the growing startup scene in North Carolina.

The team at DZone is currently made up of twenty employees across the globe. Following the launch of AnswerHub, the company expects to grow steadily by 50 percent each year.

“Our community in its first stages was a labor of love and activism,” the company wrote. “With AnswerHub we seem poised to enter the most exciting stage of our existence so far with world-class customers coming to us for enterprise Q&A solutions.”

DZone attributes the majority of its success to both its strong boostrapping principals and its passionate company culture. “The D in DZone stands for ‘dork’ and we love every second of it,” the company said. “DZone’s startup culture is highlighted by our entrepreneurial spirit in conjunction with our Nerf gun arsenal, collection of bean bags, multiple helicopters, and a gong we ring to sound success.”

As a Data Scientist/Programmer,  I visit DZone on a regular basis … I cant express in words how much I appreciate DZone’s contents … keep up the good work. I hope i can contribute some day too by writing some articles