Over the last several decades’ women have begun moving out of the home and into the workforce. It’s not uncommon for most modern families to have a two-income household. Part of this transition is thanks to the newly emerging technologies that help make our daily lives easier. In the near future computers and personal assistants will begin to take an active role in our day-to-day lives, especially with household tasks.

In 1999, Disney Channel aired an original movie called Smart House. The movie’s main character, Ben, wins a computerized home in an online contest. A cyborg maid named PAT (Personal Applied Technology) controls the computerized “Smart House”. PAT, which sounds eerily similar to Apple’s Siri, can handle all of the cooking and cleaning chores of the house along with setting personal diets for each member of the family among other things.

Apple made a cameo appearance in the movie with the iMac — the first product Steve Jobs released as CEO in 1998 — however the other technology featured in the movie is vastly outdated. Twelve years ago the writers of Smart House envisioned the “smart house” of the future, centered around the home’s “mother-like” computer technology PAT. What they didn’t envision was the revolution of the mobile phone and entertainment industry among other things over the past decade, mainly in part thanks to Steve Jobs.

Jobs has presented consumers with an array of products they did not know they needed. The rise of the iPhone revolutionized the mobile phone industry while setting the standard for future competitors. Then came the iPad, which is currently revolutionizing the way we read newspapers, magazines, and surf the web. 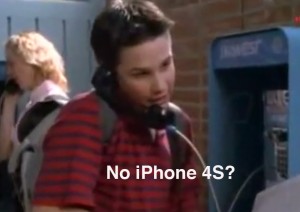 If Smart House was filmed today, Ben would have entered the contest by tweeting the hashtag #SmartHouse on Twitter. Perhaps he would have called his dad from his iPhone 4S. While we might not have the technology for a “Smart House” yet, we’ve made some significant progress in twelve years time. The iPhone, the iPad, eBooks, social media; but what’s next?

One of the biggest clues to Jobs’ future vision for the company was discovered in the recent biography written by Walter Isaacson titled simply: Steve Jobs. Many readers are pointing to this specific quote from Steve Jobs in the book as proof that Apple is working on a branded TV:

“‘I’d like to create an integrated television set that is completely easy to use,’ he told me. ‘It would be seamlessly synced with all of your devices and with iCloud.’ No longer would users have to fiddle with complex remotes for DVD players and cable channels. ‘It will have the simplest user interface you could imagine. I finally cracked it.'”

When you try to imagine the possibilities of an Apple TV, you can’t help but compare it to Smart House’s “PAT”. The Siri technology will allow Apple’s TV to essentially become the all-in-one personal family assistant. All of the family devices will connect seamlessly through the iCloud. The family computer will transform into the family iTV. As TechCrunch’s MG Siegler points out, the Television market is “ripe for disruption”, so it’s no surprise that Apple has been working on prototypes.

My question is, what comes next?

Last week YouTube announced that it is working on a competitor to cable. With the TV market in its sights, could Apple be working on a competitor to cable television as well? More then likely, yes, but don’t think Apple doesn’t have a few tricks up its sleeve. My prediction is that Apple will start with the TV and work its way into the heart of the home of its consumers. I am envisioning everything from iFridges to iShowers. That’s right, Home Depot and Apple will have sights on consumer appliances and why not? The sky is the limit once the TV market is breached.

Imagine everything in your house participating in a frictionless content flow experience throughout all of your devices and appliances. For example, you are watching a movie downstairs and walk to the kitchen to get a snack. Your iFridge knows that you got up from the couch so it transfers the movie to its built in-touch screen. This touch screen also keeps track of the food that’s in your iFridge and lists contents that are past the expiration date or even what needs to be bought at the store. When you go to the store your iFridge’s data syncs through the iCloud directly to your iPhone.

This is the world we will soon live in. These are just some of the many conceivable products of the future. If you want to know where the tech industry will be impacting our day-to-day lives next, look no further than your own home.