You press the shutter button, but instead of developing the film or downloading the photo, the printer prints out a description, in text, of the “picture” you snapped.

“Corner of a wood floored room with a tool chest, bike, stack of books, box leaning against the wall, and open door with a bag hanging off the doorknob, and a pair of closed, double doors with cables hanging on the handles,” reads one such printout generated by the camera.

This bizarre device, which creator Matt Richardson calls a “descriptive camera,” actually exists – and works using an innovative combination of cloud computing and crowdsourced labor. It sends photos to human beings using Amazon’s Mechanical Turk API, which lets developers assign “human intelligence tasks” to workers on the internet, who write short descriptions of the content and fire them back to the camera, which then prints them out on small pieces of paper.

You might call the decentralized combination of automated and human tasks “cloudsourcing.”

Richardson, a graduate student at New York University studying communications technologies, is an avid photographer and videographer. I asked him whether the descriptive camera is a study in emerging technology, or a work of conceptual art.

“It’s a bit of both,” Richardson told Tech.li, in an email message. “It’s conceptual art that nods at our changing relationship with technology. When it comes to tech, I find myself asking ‘what if…’ a lot. What I make explores those ‘what ifs.’”

What about a camera that cut out the human component, and described scenes using sophisticated artificial intelligence? At least one project, a program affectionately called DARCI by computer scientists at Brigham Young University, has made inroads into teaching a computer to assign adjectives to works of arts.

But Richardson is more concerned with using the technology currently available – or dreaming about what we’ll be able to do with technology in the future – than with developing new systems himself. 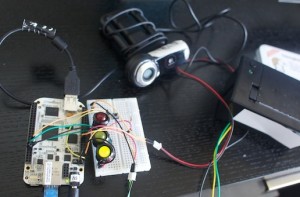 “I’m not as concerned about how technically to make it happen,” he wrote, of the possibility of a future device that would cut out the human middleman. “I like to think about what we can do with the technology once we have it.”

Apple’s WWDC Is Sold Out, But You Can Still Get In On The Action