University of Delaware Forges Clean Fuel From The Sun

Erik Koepf, a doctoral candidate at the University of Delaware, has created a method of harnessing the sun’s energy to create solar hydrogen, an entirely clean fuel source. The university is currently running a fuel cell program where it’s using hydrogen fuel to power its buses.

The process for creating the solar fuel takes place within a 1,750 pound reactor specifically built to withstand extremely high temperatures. Koepf’s process aims to store solar energy in zinc powder, which is commonly used as a source of energy in batteries and fuel cells. Once the reactor has been heated up to about 3,000 degrees Fahrenheit, the zinc oxide powder is fed hoppers into the chamber, where it eventually decomposes into pure zinc vapor powder. The powder then produces clean solar hydrogen after coming into contact with water. 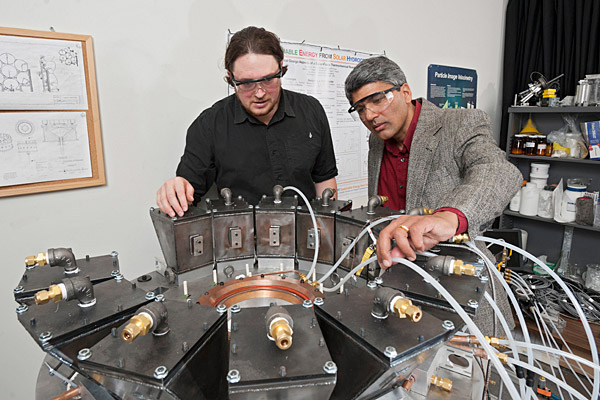 A similar sunlight-to-fuel process was jointly developed by the California Institute of Technology and the Swiss Federal Institute of Technology using cerium, a rare-earth metal, back in 2010. Their process created carbon monoxide and hydrogen, though was very inefficient due to large amounts of heat loss. The prototype could only produce between 0.7 and 0.8 percent of the solar energy it took in.

Koepf’s process is not only a potential breakthrough for green technology, but also realistically sustainable. A theory behind the process points out that the leftover zinc byproduct could potentially be reused for further batches. Up until now scientists have had a great deal of difficulty producing hydrogen from non-fossil fuel sources – a problem that Koepf aims to fix with his new process.

In the university’s press release, the director of the university’s Center for Fuel Cell Research, Ajay Prasad, expressed his admiration for Koepf’s ambitious project. “This is probably the most complex device built by a graduate student in the history of our department.

This week Koepf will begin fully testing the reactor at the Swiss Federal Institute of Technology, measuring temperature and oxygen within the chamber to get a better idea of how much solar zinc the process can produce. The testing of Keopf’s reactor will continue for the next six weeks.

All images credit: University of Delaware