3G users on AT&T’s network have been upset for a long time about the company’s failure to detail exactly what amount of usage lies outside of their unlimited data plan. After initially offering a truly unlimited data plan, AT&T changed over to a scheme that would slow the 3G speed for the top 5% of its users, sending a message to them at any point during the month when they had gone over. The biggest problem with this model was that users didn’t know where they would fall in any given month, or how to plan accordingly, outside of tediously checking their data usage every day. AT&T’s new plan will still continue to limit users, but in more defined terms. 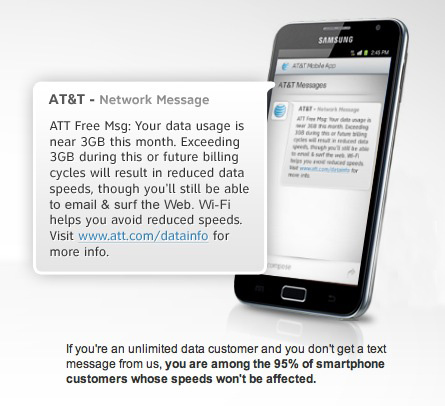 A little taste of how AT&T plans to let you down easy.

This month AT&T announced it will be throttling unlimited data plans that go over 3 GB every month, severely slowing data transfer speed until the billing cycle has lapsed. The plan is technically unlimited, in so far as the ability to transfer data. In reality limits still exist in the amount of data a user can transfer before their speed is changed. Users will still receive a message when they’ve gone over the allotted 3 GB in a given month, and can now dial *data# to be sent an update of their data usage via text message.

While it’s painful to think too deeply about how AT&T is still calling this an unlimited data plan, at least users can now be sure of the specific limits of their service. The best ways to avoid going over your newly set limit would be to use Wi-fi whenever possible, maybe limit smartphone usage to surfing the web or checking email, and save big data apps like Netflix streaming for the home. If anyone’s truly in an uproar about AT&T’s new policy, it looks like Sprint might have the only data plan left without any limits, speed caps or otherwise, so if your contract’s almost up it might be time to run for the hills.

It seems a bit excessive to be using upwards of 3 GB per month on a 3G network, but if people are paying extra money for an “unlimited” data plan they should be getting what they pay for. At the very least, after capping a data plan that supposedly doesn’t have a ceiling, AT&T should have the courtesy enough to change its name. So much for wishful thinking.

Friends: A Penny Each