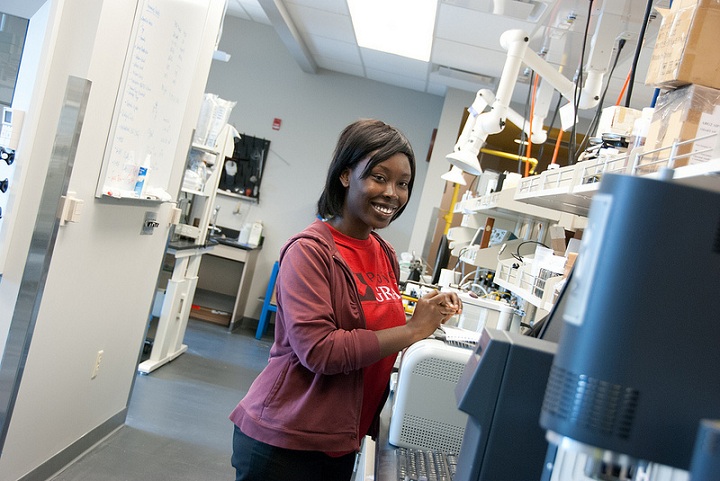 A worker at University of Akron’s Timken Engineered Surfaces Laboratories, one of many organizations that helped Northeast Ohio innovation grow in 2013.

With the arrival of 2014, it’s time to close the book on the year that was 2013. To say it was a very busy 12 months in Northeast Ohio is a vast understatement: From companies making national waves and the emergence of cool new technologies to landmark investments and new entrepreneurial resources, there was plenty of notable forward momentum in the region. Here are 10 big 2013 trends, milestones and achievements.

2. Companies attracted some big investments. Leading the way was TOA Technologies—a developer of mobile workforce management software solutions that received a $66 million capital infusion from the Silicon Valley-headquartered Technology Crossover Ventures—and medical device company ViewRay, which received a $30 million investment. Another medical device company, CardioInsight, developers of non-invasive cardiac mapping technology in the form of an electrode-filled vest, raised $15 million from a strategic partner as part of a long-term financial deal that allows the Cleveland company to continue product development and clinical trials.

6. Healthcare innovation continued to thrive. The Midwest has long been a hub for healthcare— and home to companies such as Juventas Therapeutics, which started enrolling patients in a Phase I/II clinical trial, and CoverMyMeds, the prior-authorization software company which joined the SaaS capital portfolio and placed in the Top 100 of the Inc. 5000. Investment stats are also backing up this assertion: The 2013 mid-year BioEnterprise Midwest Healthcare Venture Investment Report found that 117 companies received $351 million, with Ohio—and specifically, cities such as Cleveland and Cincinnati—leading the way. In addition, BioMotiv—an organization formed to accelerate pharmaceutical commercialization—spun out its first two companies and attracted $25 million in capital.

7. Companies continued to exit. Cloud computing firm Paragrid was acquired by another company in its industry, Evolve IP. In addition, a Canadian investor bought a controlling interest in the Beachwood-based pet insurance company, Embrace Pet Insurance.

8. There was plenty of regulatory approval. A number of local medical companies received regulatory approval either in the U.S. or overseas for their technology, product or device. This list includes Neuros Medical, Zuga Medical, SPR Therapeutics and Synapse Biomedical. Another company, Freedom Meditech, announced the U.S. commercial launch of its ClearPath DS-120™ device.

9. Northeast Ohio innovators were lauded with national media kudos. Northeast Ohio’s entrepreneurial scene received recognition in places such as Slate and The Atlantic, while its companies have appeared in Good Housekeeping and on The Today Show (Wireless Environment and its LED-friendly lights), snagged a deal on ABC’s Shark Tank (Al “Bubba” Baker and his de-boned ribs) and appeared on NPR (Cleveland Whiskey), FastCompany (Sprav) and Crowdfund Insider (Crowdentials). Multiple startups made the Inc. 500/5000 list, and Darkside Scientific—which has developed electroluminescent paint coating that glows—was featured in a video that’s part of Progressive’s new national campaign.