Forgive me if I am behind the times, but I’ve just recently discovered YouToo.com, and the site’s painfully obvious trademark issues are just too noteworthy for me to ignore. 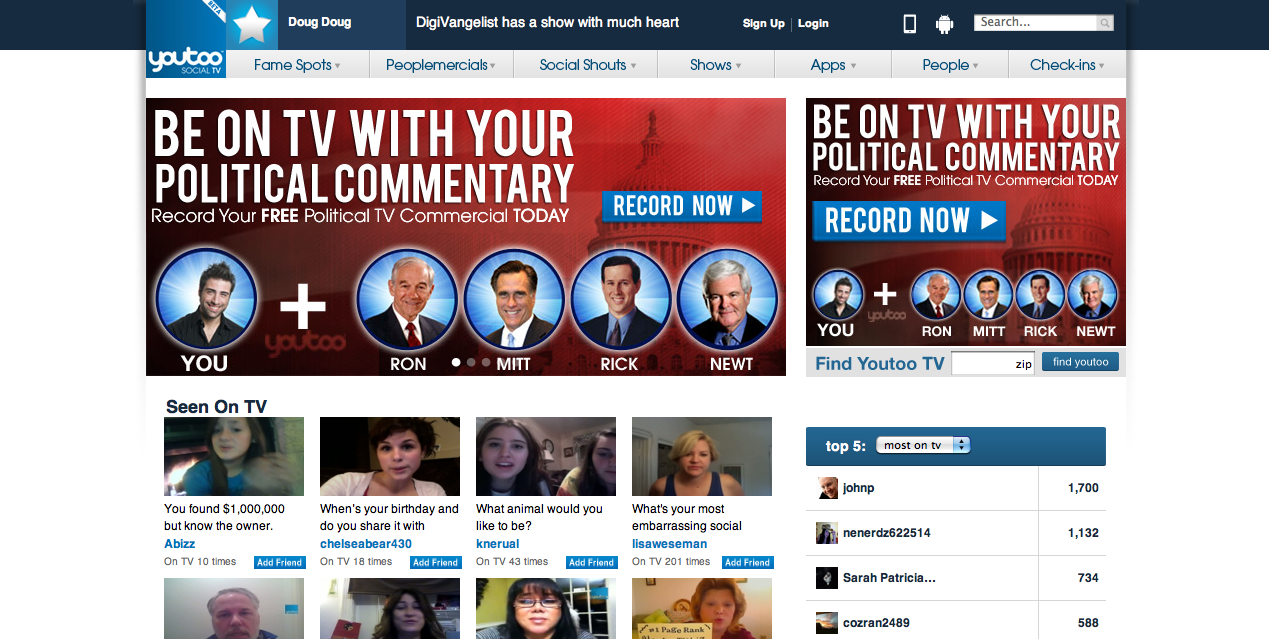 YouToo brands itself as a “social TV” website where users can apparently upload, watch and comment on videos on the Internet. Yes, I said “YouToo”, not “YouTube”. The site is currently promoting an opportunity to “be on TV with your political commentary” on the GOP race, and some sort of Batman-related video submission contest. They also apparently have some sort of promotion going on with Pauly Shore.

According to filings with the United States Patent and Trademark Office (USPTO), YouToo launched at least as early as December 2010, with its initial trademark registration application being filed in June of that year.

Not surprisingly, the YouToo trademark registration applications (three in total) have been denied by the USPTO on the grounds that the trademark is too “confusingly similar” (the test for trademark infringement) to — you guessed it — YouTube.

However, YouToo is not giving up without a fight. Its attorneys opposed the USPTO’s initial denial of the trademark registration applications (a fairly standard practice under most circumstances), and, after being denied again, filed for reconsideration. Then, after being denied yet again, they filed an appeal with the USPTO’s judicial branch, the Trademark Trial and Appeal Board.

Among other things, YouToo’s trademark lawyers have argued that there are some 40+ active trademark registrations and pending applications that incorporate a “You” prefix. In response, the USPTO noted that these other trademarks do not also include the subsequent “to” sound, and also pointed out that the similarities between YouToo’s and YouTube’s services are, obviously, quite substantial.

So, why would a company this day in age start a video sharing site and call it “YouToo”–and then not back down when presumably everyone and their mother tells them that the name is a bad idea? For one, they may actually believe that the trademarks and services are sufficiently dissimilar. For another, they may be trying to milk some publicity and hope to get off light when YouTube’s trademark lawyers come knocking at their door. Or, perhaps they want to sell out to YouTube, and think that this is the best way to go about it.

Regardless of the motive, it will be interesting to see how this one gets resolved.