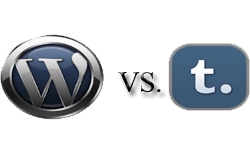 Over the past couple of years blogging has become the thing to do. Choosing the right platform is almost as important as the content you will write, so I decided to compare a popular kid on the block to a newbie: WordPress vs. Tumblr.

WordPress (WP) (started in 2003) is an open source Content Management System that has a fairly simple backend that allows users to create multiple pages, utilize plug-ins, widgets and placement of content in sidebars.  WP can be downloaded for a user to host on their own server which allows for greater control over the site such as downtime, customization, etc.  Installing and configuring WP can be a little challenging for a non-technical user seeking to build their site themselves but doable with a little bit of knowledge base reading. WP is search engine friendly and easily optimized via back-end plug-ins. WP also supports ads that can be placed in varies areas of your site for additional revenue.

Tumblr (launched in 2007) is a community based site where you can follow and reblog other Tumblr’s content. Tumblr is the more budget-friendly option of the two being that you would need to purchase a hosting account for WP. Tumblr sites are hosted by Tumblr (which means free for you) and are not available for download onto your personal server, therefore there is no need to configure databases.  Tumblr also offers free url mapping; so instead of your site having to point to a subdomain like yoursite.tumblr.com it can point to yoursite.com. Tumblr has an amazingly well designed straightforward dashboard that makes customizing your content quick and easy.  It even has the option to purchase a variety of nicely designed templates from the dashboard as well.  Tumblr also provides services that will allow a user to upload post via phone, text or email. Because of some of these features some organizations like the Chicago Police department have chosen this platform as a way to reach a younger audience.

So with all that said who gets my nod…WordPress! Why? Because the options out weigh the ease. Tumblr is more restrictive in its approach so WP won me over.  A user would need to build its Tumblr following to get the full benefit of going with this platform. If your audience aren’t Tumblr users than the efforts behind your project are going to be a bit more challenging. With WP, it is more widely used and not restricted to a community of users. Tumblr has a cool concept and if it get popular enough it could make lots of noise but for now WP is the way to go for me. WP offers more options for greater customization (with hundreds of templates available by varies designers) and flexibility.  Most WP sites also allows trackbacks so that you can see who is referencing your site and content. Its always good to know who’s talking about you!  So check them out and see which suits you best.

What do you use for your sites or blog? Tell us in the comments!