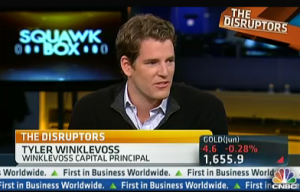 Remember Tyler and Cameron Winklevoss, who tried to bring down Mark Zuckerberg in The Social Network? The fight didn’t end on-screen. The twins settled for a reported $65 million after suing Zuckerberg for stealing their IP for Facebook. But instead of laying low after “sticking it” to Zuck, the brothers are back and intend to play hardball in the startup scene. This time, they’re funding companies instead of starting them.

The Winklevosses appeared on CNBC this past Friday as part of a series called “The Disruptors” to announce their new venture capital firm, Winklevoss Capital. According to Tyler, they are closing “a couple deals hopefully within this month.” He also noted that the fund is focusing on “early stage, disruptive startups”.

We’re looking for startups where we can add both capitol and operational experience and sort of make an impact, work with the entrepreneurs, to build their team and sort of add value”

Tyler added that they are extremely interested in making investments in companies offering services in the cloud. The twins  are parroting the current trends in venture capital, since every new fund is focusing on this same niche: early stage disruptors in the cloud to which they can add operational value.

Despite being the most hated brothers in the tech world and working within the crowded space of early stage venture capital, the twins are dead serious about their ability to make investments in companies that they think are going to change the world. One of their first potential investment, Yottabyte, is what Microsoft‘s Windows was to desktop, for cloud operating systems.

Of course the interview wouldn’t be complete without the CNBC crew bringing up how the Winklevoss twins’ experiences at Harvard shaped their partnerships going forward. They confirmed a number of hanging question marks that have been lingering for the public since the success of The Social Network, including:

Although the Winklevosses still hold onto the importance of their roles in the creation of Facebook, taking money from them could make the startups they work with pariahs in the tightly knit startup ecosystem. Although the twins maintain that they have conducted themselves appropriately over the last several years during the drawn out litigation, they are still regarded as the antagonists in a geek version of David vs. Goliath.