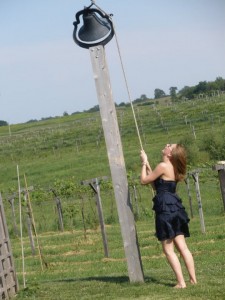 Author of this article is drawn.to: wineries, ruffles and random bells...

Exploration: it led Columbus to America, and led me to Chicago. Moving was the most enticing part of striking out on my own. When I got there, I looked around and said, “Great I’m here! Now what is there to do that interests me?”

A new website called Drawn.to would have been my first defense in getting friends from around the city together. Founded by college buddies Robert Leshner and Geoff Hayes, Drawn.to allows you to create an engaged event management area where you can tweet, e-mail or Facebook your event to friends and family.

Drawn.to is cool because not only can you put together events, an analysis tool can help you decipher which outreach methods work best.

“Our analysis can help show how emailing friends and family really works, but not many people responded via Facebook,” said Leshner.

A picture or image is required, a feature Leshner says they implemented after seeing how images actually help get people to sign up for events.

Selling tickets to your kegger? Drawn.to has you covered with its easy to read ticketing overview window, showing exactly how many tickets are purchased and how much money you can keep or donate.

“Right now the choices are free or paid, but in the next few days we are going to add a feature to allow users to make donations of their choice, which we figure would be ideal for community groups or fundraising events,” said Leshner.

Leshner and Hayes were inspired to create Drawn.to for the sheer purpose of bringing people together. They have already launched an app called Flyer, which helps get people in the neighborhood together for anything from yoga class to pick up basketball games.

“If I wanted to throw a barbecue, I would have to go door to door to my neighbors and ask,” said Leshner. “So we thought there had to be a better way.”

Growth and development from Flyer to Drawn.to has come from good, old-fashioned user feedback.  Users of Flyer liked the idea of community involvement but wanted a space “larger than the app” to grow and promote their events, said Leshner.

So check and see who you can draw in!