5Degrees – A Search For Tech Talent

I originally agreed to write for Tech.Li planning to document my summer internship at 5Degrees. However, since I started writing I have also been talking about tech talent in Chicago. Tech talent continues to be top of mind so I thought I would blend the recap of my second week at 5Degrees with a resource for start-ups in Chicago.

During that second week we held focus groups, pitched to angel investors and most importantly, held a re-branding session that resulted in 5Degrees.  We also were able to fully participate with the Academy for Entrepreneurial Leadership, 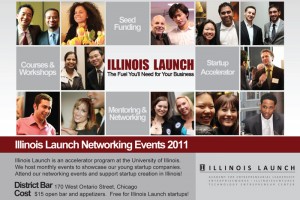 which is the resource that Chicago start-ups should really look into.

So here we go — during my second week at 5Degrees we were still working on a name. A product that started off as GitBax needed a face lift. GitBax wasn’t professional enough and Koniktify and Knkt.us weren’t really resonating with the team. The GitBax management team had become involved with the Academy for Entrepreneurial Leadership, better known as Illinois Launch and they had arranged for a full day of meetings for us in Urbana-Champaign. The agenda included a re-branding session with a team of U of I undergrads; two focus groups with students and members of the Illinois Launch community; the opportunity to pitch angel investors involved with the program; and a networking barbeque at the home of John Clarke, the Executive Director Illinois Launch.

We started the day leaving Chicago at 6 am and headed south to Champaign; this was my first time meeting with Edward Domain, the founder of Tech.Li, who was traveling with us to cover the day’s events. I guess this was a pretty big day for me as I was tasked with running the focus groups and I also got to spend a lot of time with Ed.

During a previous Illinois Launch networking event the 5Degrees management team had met Michelle Lenzen, a U of I undergrad who was interested in starting her own branding company. We had arranged to meet with Michelle and her colleague, John Pearce, to talk about what we should eventually call the company. We spent the morning with Michelle and John as they took us through an impressive presentation. They proposed three separate names for the company and there was immediate consensus for 5Degrees, we were going to take you one degree closer to your connections, a la Kevin Bacon!

After the morning branding session, we held two separate focus groups with members of the Illinois Launch community. These focus groups were with people that were not necessarily our target consumers, but it did confirm one fact — the user interface for any app or website is key to a successful product.

We wrapped up the focus groups and then spent some time figuring out why we got a parking ticket, then we changed clothes and headed off to a local hotel for a meeting with angel investors. The team at Illinois Launch organized an event for four start-ups involved with the program to pitch a group of angels. While there was no term sheet for 5Degrees coming from this group, it offered one more chance for the co-founders to refine their pitch, see other start-ups pitch to angels and get feedback on 5Degrees. The evening concluded with a great party at John Clarke’s house that hosted the launch teams and several of the angel investors that had been pitched that afternoon. This was a fantastic event that gave the all of the Illinois Launch start-ups the opportunity to network with their peers and get feedback from potential investors in a more informal setting.

A day that started at 6:00 am ended when I was dropped off at home in Hyde Park at 2:00 am. This concluded a full immersion into life in a start-up; a hacakathon in Michigan and two days later another road trip, this time down to Champaign. We had a fantastic day in Champaign; we came away with a new name, a clearer vision on what the product should be, a refined pitch to investors and new connections to the Illinois start-up scene.

The reason I made the connection between this week in my internship and the issue of finding tech talent in Chicago stems from repeatedly hearing about the untapped tech talent pool at U of I. Here is an abbreviated list of companies that were founded, co-founded or created by U of I alum:

Champaign-Urbana is only two hours south of Chicago. Look into the resources there! There is an Illinois Launch networking event this Thursday at District Bar in Chicago, it costs $15 but I would argue it’s worth every penny for start-ups in Chicago looking for the opportunity to potentially tap into the abundance of tech talent just a few miles to the south.

Disclaimer: Both 5Degrees and Tech.Li are part of Illinois Launch so I may be a little biased, but it’s still definitely worth a look.

Thanks for taking the time to discuss this, I feel strongly about it and love learning more on this topic. If possible, as you gain expertise, would you mind updating your blog with more information? It is extremely helpful for me.

I have been reading a lot of blogs and forums recently. Some are really informative some are entertaining and some are a real crack up. I’ve got to admit it, great job on this blog, I’ll be sure to check back from time to time