Why VisibleVote.Us Will Determine How You Vote Tomorrow & Beyond 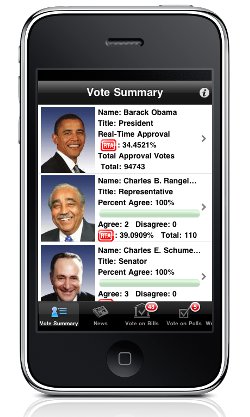 Chicago-based Visible Vote is a free application created to empower Facebook, iPhone, Blackberry, Google Android and Windows users to advise congress on how to vote on the major upcoming legislation, follow current events, understand their legislators voting records, and compare the records with their own personal belief systems. After you advise congress on how to vote on your behalf the application will cross compare your vote to your representative after they vote and provide you feedback on their performance. Every week the application compiles the users voting record and sends this information to the appropriate legislator clearly indicating whether or not their constituents support or oppose their views on particular issues.

I was able to talk with Paul Everton, founder and CEO, about technology, entrepreneurship and (yes) politics.  Although, the story about politics is not what you think. The following is a summary of our discussion. Any quotes or statements from Paul are indirectly written based on my ability to capture his brilliant thoughts in my note taking. In other words, if something doesn’t sound right, it may not be exactly what he said so cut Paul and I some slack.  Enjoy.

FG: Why did you start VisibleVote.Us?

PE:  Frustrated by the lack of transparency in government, I developed Visible Vote in early 2009 to help strengthen the pipeline between people and their legislators. Let me be up front though, I’m a technology guy and not a politician.

Did you start Visible Vote while still working or did you quit your job?

I was fortunate to work for a company that was supportive of my interests outside of work. I worked for Riverbed Technologies and I approached our CEO about my interests to start Visible Vote. The CEO was completely supportive as long as it didn’t impact my performance or the performance of my team and coworkers. Riverbed is a great company to work for and I would not have been able to launch Visible Vote without their support and my ability to keep a job!

That’s great but when did you have time to start, develop and launch Visible Vote?

I basically worked nights and weekends for a year and a half. I didn’t reduce my hours at Riverbed either. In fact, I would often work from 7am-8pm at Riverbed, eat, and then start working on Visible Vote until 1am and start it all over again. While every weekend as used to develop and grow Visible Vote, I would also have to work some projects for Riverbed. It was tough but in the end it was well worth it.

How many employees do you have?

We have 12 people on staff. The most important aspect of our company is the integrity of our product and employees. To support this mission, our employees cannot be associated with any particular party. Again, integrity is the most important value of Visible Vote.

How many users do you have?

Our aggregate number of users across all platforms is just under 200K. That means that 200K people will be more informed about their congressperson’s decisions than at any other point in election history. They also have the tools available to communicate and possibly influence decisions based on interactions with their congressperson using our platform.

Wow, that’s pretty amazing. How did you amass such a following, especially in a niche like politics, in such a short period of time?

Have you taken any funding and are you profitable?

Yes, we just closed our first round of funding from Jason Pritzker who is also my business partner and President. No, we are not profitable but we have several revenue streams. One of our goals is to think beyond Visible Vote and to develop software as a service (SaaS) that allows companies to brand the technology to meet their needs.

Why did you setup Visible Vote in Chicago instead of DC?

I moved here from Miami after my brother was accepted to a university in Chicago. I’ve been in Chicago for about five years and I was able to leverage my network and connections to help launch Visible Vote. I honestly feel that I wouldn’t have been successful if I started this company anywhere else but Chicago.

What is one tip you can give our users about networking and growing a startup in Chicago?

Look outside of the technology circle. I met most of my contacts and connections through business events and meetups outside of technology. For example, do a search for lawyers and you’ll find a lot of people who are interested in funding and supporting startups of any kind.

What do you think of the Chicago tech and startup scene?

There is a tremendous amount of technical talent in Chicago. There are also a lot of savvy investors. Again, look outside of technology for potential investors.

Do you have any other tips for startups?

1) Don’t be afraid to get your hands dirty, 2) know everything about your field, 3) network with everyone, and 4) you have to have passion for what you do.

One last question, which party will take control of Congress?

Our data shows the Republicans will win by a large margin. This is not to say that Democrats are suddenly voting Republican. Instead, independents are starting to vote Republican that will really decide which party wins.

I would like to thank Paul for his time and candor during this interview. Visible Vote is a great service that will impact the future of how citizens interact with the government. Stay tuned for more exciting site enhancements and products from Paul and the Visible Vote team.

Chad Lomax is a blogger and entrepreneur. You can read more about his thoughts at www.chadlomax.com or follow him at @chadlomax.