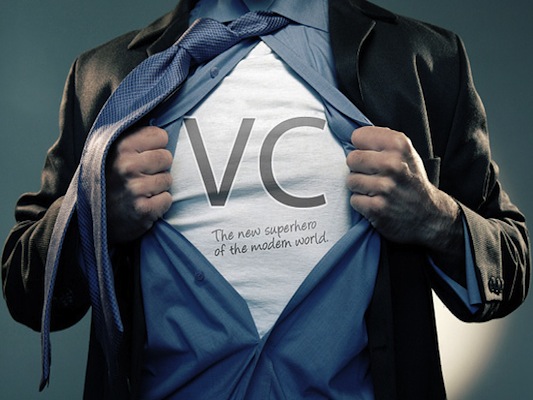 According to The MoneyTree Report by PricewaterhouseCoopers and the National Venture Association — based on data from Thomson Reuters — as the economy remains moribund in glacial growth, venture capital investments for Q3 slowed down.

According to the report, total venture capital investment in the third quarter totaled $6.95 billion in 876 deals during July through September. In terms of total dollars invested this is a drop of 12 percent and a drop of 14 percent in terms of deals.

Specifically, seed funding fell 56 percent in terms of dollars quarter over quarter, and 41 percent year over year. In addition to the total amount of seed investment, the amount of money per deal has also declined. The average seed deal in the third quarter was worth $2 million, which is a 43 percent drop from the second quarter, where it reached $3.3 million.

Of all the industries receiving venture capital investment, software remained the strongest sector with $2.0 billion invested during the Q3, which is a 23 percent increase in spending and, according to MoneyTree, the highest quarterly investment since 2001.

Before one starts to worry that the sky is falling on the New Economy, keep in mind that Q2 of 2011 had a ten-year high in investing when 292 deals were done for a total of $2.4 billion.

Venture Capitalists Keep Raising Funds; Just Not As Many

According to Thomson Reuters and the National Venture Capital Association (NVCA), fifty-two U.S. venture capital funds raised $1.72 billion in the third quarter of 2011. 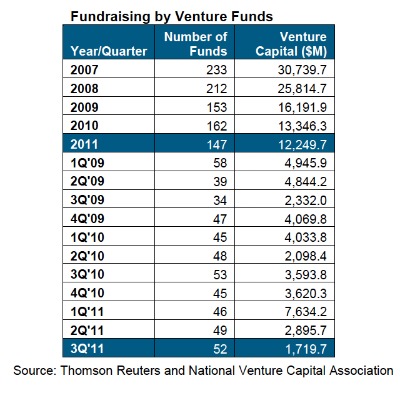 “The quarter’s low fundraising numbers are reflective of ongoing challenges within the venture capital exit markets,” said Mark Heesen, president of the NVCA. “Economic instability continues to impact the ability of venture-backed companies to go public which, in turn, has prevented many venture firms from delivering solid returns to their investors. Until we begin to see a steady and sustainable flow of quality IPOs which return cash, limited partners will remain on the sidelines and the venture industry will continue to contract. This situation is one that needs to be rectified in the near term if we want to have adequate dollars to invest in our country’s startup companies in the long run.” 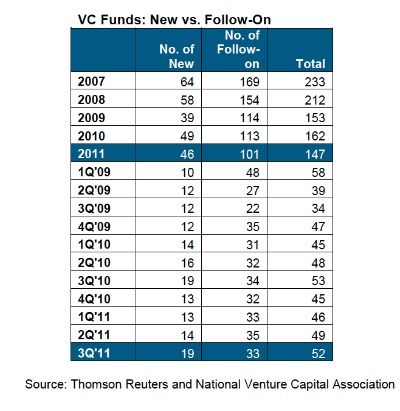 What Does it Mean for the Fund-Raising Entrepreneur?

In my discussions with venture capitalists I keep hearing the same two lines over and over: “It’s a great time to raise money,” and “There is a lot of froth in the market.”

Just as entrepreneurs have to justify themselves to potential investors, VCs must justify themselves to the people invested in their funds who are always thinking in the back of their head, “Why didn’t that joker venture capitalist I gave my money to invest in Groupon or Facebook?” (Okay, maybe not, but this is the topic of a future article.)

There are many equations that filter into the funding of new companies and despite the dips, 2011 is a great time to invest and short of Occupy Wall Street burning down NYC, 2012 ought to be good as well. It also wouldn’t hurt if the industry had some solid IPOs hit the market. 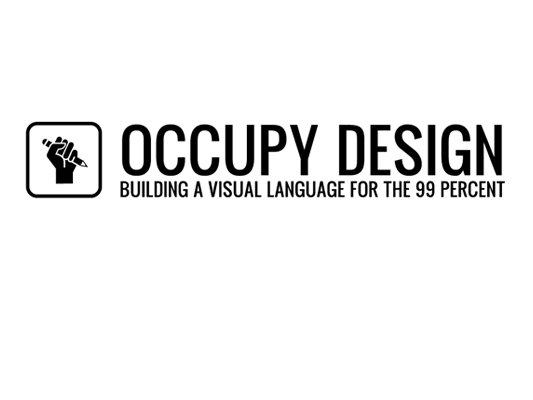 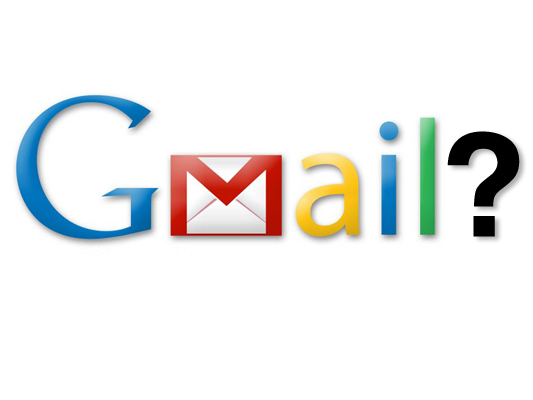 Gmail gets a Facelift?