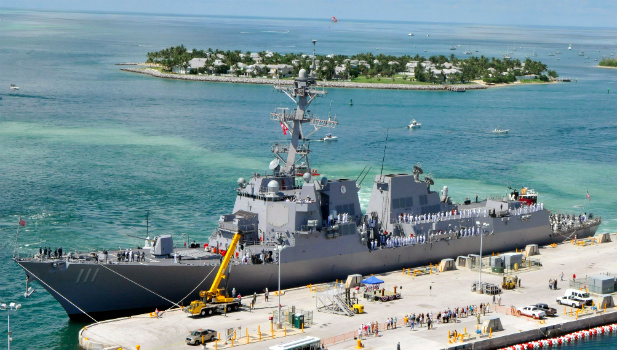 Lunch was in the Wardroom, attended by both officers and enlisted crew, one placed between each of us for easy conversation. I had the privilege of sitting next to the Executive Officer (XO) who was next to the Captain at the head of the long table. The food was as good as the outstanding service: prime rib, fresh wrapped asparagus, roasted potatoes, hot rolls, cake drizzled with a chocolate sauce.

“Captain” I said, “Do you eat this well every day?”

“We do” he replied, “the presentation isn’t always this fancy, but we do eat well”.

“Except today is normally ‘Taco Tuesday’ so the crew is wondering why they have prime rib today,” said the XO. “They are probably wondering what we are going to ask them to do” he smiled.

“Yes, the last time we changed the regular menu we had a last minute run to San Francisco for Fleet Week” said the Captain.

At the end of lunch I presented the Captain with my book (Humble Heroes, How The USS Nashville CL43 Fought WWII) for the ship’s library. Genuinely appreciative, he 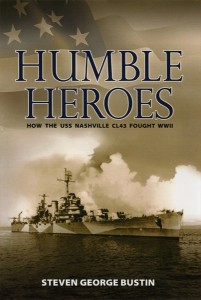 thanked me and took notice of my personalized note to the crew using the ship’s motto, “Launch the attack!”, the orders that Admiral Spruance issued during the Battle of Midway in WWII. The Ward Room displays the Admiral’s dress uniform and a copy of the orders.

After our meal we toured more of the ship including one of the helicopter hangers that had become a makeshift gym for the crew, including weights and what was a source of amusement for us, treadmills. Why the amusement? One dedicated sailor was running at a good pace on a treadmill but as the ship rolled substantially from side to side, the sailor was in turn running decidedly downhill and uphill with each roll. I imagine it was an acquired skill to stay upright.

Our tour for the day ended in the original helicopter hanger where we started. Here we were shown yet more weapons, in this case, of the close range and hand held variety. Displayed on the deck before us was an array of guns including the tried and true .50 caliber mounted machine gun, assault rifles, a shotgun and a handgun. One might think that after seeing high technology weapons of some seriously massive destruction, we would not be enamored by these close range standards. One would be wrong. A proud young female sailor talked about the capabilities of each weapon, told us when they would be used (when docking generally) and literally handed them to us for the tactile experience. We were all grown men, all successful adults, and we were like kids discovering their first Luke Skywalker Lightsaber.

The seas were getting rougher, the wind kicking up, the ship noticeably pitching and rolling more as we awaited our ride home, a SeaHawk helicopter like the one we arrived on that morning. However, there was real uncertainty regarding landing on the small deck in such sea conditions. We were told that in the event it was too dangerous, they had already made accommodations for us to stay the night in the crew quarters. Looking at each other, we burst into smiles and agreed we would welcome such an opportunity. But the pilot did indeed land on that moving deck, perfectly as it was and soon we were on our way back to San Diego. It is safe to say we all gave our day a great deal of thought upon our return. The weapons technology was impressive but no more so than the design and functioning of the ship itself. Most impressive was of course the officers and crew, highly trained, seriously focused, dedicated men and women. From a distance, the untrained eye would not discern this ship from any other they have seen in the past 50 years, a haze gray ship with a large superstructure, a couple of smokestacks and a big gun on the bow. But in reality, this ship, from design to engineering, from weapons to environmental sensitivity, is much closer to a spacecraft than a Vietnam Era warship. And somehow, as much as we saw, I strongly suspect there were even cooler, more advanced technologies at work, unseen by us and perhaps most of the crew. One wonders.

Why is Facebook Subject to Such a High Corporate Tax Rate?