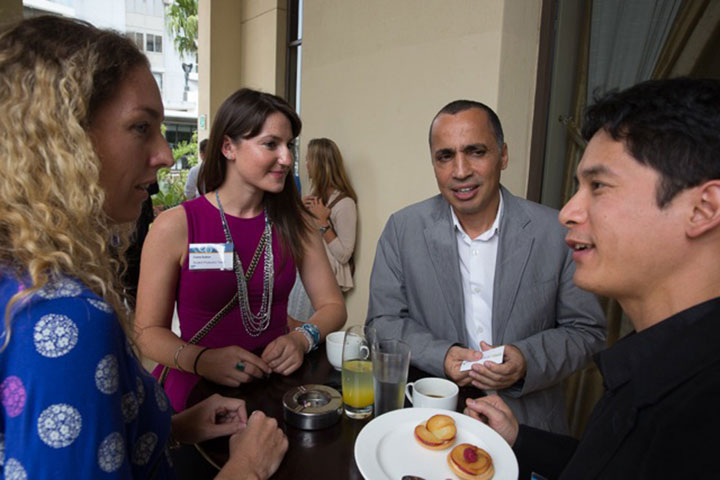 COO Minh Cuong Le Quan and Founder and CEO Mouhsine Serrar (from the right) at an Unreasonable At Sea event in Cape Town, South Africa.

Imagine spending 30 percent of your income on cooking fuel, inhaling the equivalent of 20 cigarettes daily while preparing meals for your family, and having to send your daughter to collect fuel for hours every day. What sounds like a far-fetched scenario is the reality of millions of people around the world in countries like Nepal, Darfur and Haiti.

In my last article, I introduced you to a venture called Deaftronics and showed you how it empowers hearing-impaired people. This time you will meet Prakti, a social enterprise that provides clean and efficient cooking stoves for people in developing countries.

Traditional forms of cooking, i.e. three-stone cooking fires and mud stoves, cause widespread deforestation and serious health issues due to indoor air pollution. What’s more, this form of cooking is so inefficient that about 90 percent of very expensive energy is wasted.

Three billion people globally depend on solid fuel for cooking, and stoves are among the most-used products in the world. While the need for more efficient stoves is accordingly massive, Prakti has to meet the same need as all other social ventures’ products, which is reflected in the company’s name: they must be practical, function in tough environments, and be easy to operate. These constraints forced Moroccon-born founder and CEO Mouhsine Serrar to design, manufacture and distribute the stoves at an extremely low cost. Yet, as you can see in this video, 60 U.S. dollars for a stove is still too much for many people at the BoP (bottom of the pyramid).

Nevertheless, Prakti’s stoves are already helping more than 250,000 people in four countries and three continents cook cheaper, more efficiently and more ecofriendly. Those who use Prakti stoves are able to cut fuel cost at least in half and reduce the smoke emitted by up to 80 percent, which saves roughly 20,000 trees every year.

One trait all social entrepreneurs share is that their products are tailored to the unique needs of BoP people. Prakti regularly hires village women to cook on Prakti stoves along with stoves of the competition and traditional stoves. Testing prototypes with potential customers and early adopters allows Prakti to get invaluable feedback, see what works (and what doesn’t), and customize its products (Nobel Prize-winner Muhammad Yunus called this “the worm’s-eye view”). Once again, the corporate world can learn from these savvy pioneers; in fact, some enterprises like Procter & Gamble and SAP are already leveraging these real-world investigations.

In spite of the thousands of lives the social entrepreneurs of Agua, Deaftronics and Prakti have already positively affected, a lot of work remains to be done. More than 700 million people still lack access to clean water, almost 600 million are still hearing impaired (with two thirds living in developing countries), and 1.6 million people are killed by smoke from cooking fires each year.

Yet, social entrepreneurs like Pedro Tomas Delgado, Tendekayi Katsiga and Mouhsine Serrar are turning major challenges into special opportunities, thereby make the world safer, cleaner, more equitable and more sustainable. These pragmatic visionaries give us all reason for hope and, more importantly, an impetus to emulate and help them. Moreover, the globe’s public and private organizations should support and fund these innovative trailblazers.

After all, the best way to predict the future is to create it.