Home > Blog > 10 Ways Twitter Has Been Used For Social Good

This past week Twitter reached a new milestone as it crossed 532 million registered members – just in time to celebrate its sixth birthday. Since co-founder Jack Dorsey sent his first tweet, the social apps has changed the world through 140 characters.

Here are 10 ways Twitter has been used for social good.

1. Twitter followers flood Justin Bieber’s Charity: Water page to donate money as an 18th birthday gift to the performer:  Justin Bieber leveraged his social following to get teenage girls to shower a charity with money rather than shower him with gifts and fanmail for this 18th birthday. To date, Bieber has raised $15,925. 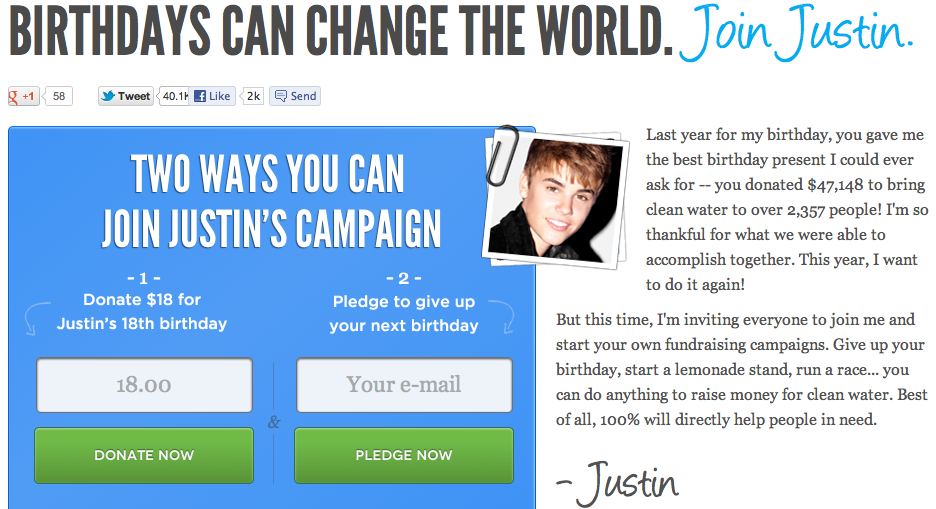 3. Occupy Wall Street uses twitter to organize and broadcast coverage ignored by the mainstream media: Following the #OWS and #occupywallstreet hashtags on Twitter was the best way to keep track of the movement last fall as it was unfolding. Although the mainstream media tried to minimize the magnitude of OWS, Twitter revealed the truth about the movement in each city.

4. Citizen reporting on twitter changes the balance of power in global politics: The Middle East experienced tremendous changes in 2011, and Twitter was there for people to turn to for news and opinion during the protests. Access to a free and open Internet matters to citizen journalists who fight against censorship now more than ever.

7. Internet crusaders stop SOPA: The tech community ceased fighting each other for a few weeks to unite against a bill that would potentially change content on the internet as we know it. People tweeted in protest, and some replaced their Twitter avatars with a black and white “STOP SOPA” proclamation. The bill was shot down, and geeks resumed their bootstrapping vs. VC funding debate.

8. Pet lovers connect shelter pets with adoptive families: AdoptaPet.com added a Twitter button to each pet profile so that you can publicize your favorites when you can’t adopt them yourself.

9. The twitter community shows an outpouring of support for Japanese earthquake victims: When Japan was hit with a major earthquake and tsunami in March 2011, an outpouring of information and fundraising efforts helped the Japanese relief effort become one of the most successful campaigns ever on Twitter.

Twitter can be a time suck, or it can be used to change the world. What you do with your tweets is up to you.

FTC Throws Weight Behind Do Not Track