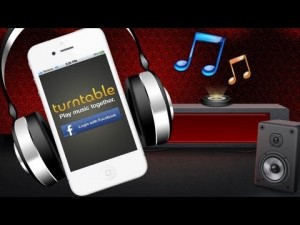 Call it luck, call it good timing, but I think Billy Chasen & Seth Goldstien knew what they were doing when turntable.fm released its iPhone/iPad app early last week: they were preparing for Chicago’s Turntable.fm Social Media Week Afterparty.

The app comes just 3 months after turntable.fm opened its virtual doors to the public. No longer must you be on your laptop, hauling your DJ room around. Now it can sit in your pocket, giving you even more opportunity to discover new music with new friends.

Much like its website counterpart, you see the virtual concert room front and center. Clicking on a few buttons allows you to chat, change your settings to the latest avatars and update your playlist, but you don’t see them all at the same time the way it’s laid out on the site. Turning off your iPhone still allows you to hear the music going on in the room, so you never miss out. This app is going to make turntable.fm Pandora’s next big competitor.

Of course, the app is not without its faults; it’s still in beta and has some kinks to work out. Personally, I have trouble logging in every now and again, and the music doesn’t start up right away (but they’ve had that issue with the website version). At least it’s a step up from the flash-based site that was impossible to play on an iPhone- you could see, but could not hear music, and really, at that point you just turn it off.

That’s not the only exciting news for turntable.fm. Last week Seth and Billy announced they have raised 7 million dollars. Investors include Union Square Ventures, First Round Capital, Polaris, Lowercase Capital, and Benchmark.  In addition, a small group of industry angels also participated in the fundraising round, including Troy Carter, Tim Kendall, Guy Oseary, Vivi Nevo and a few others they can’t name just yet.

If you’re like us, you can’t get enough of turntable.fm, and we hope to see you tonight at English in Chicago’s River North for the Turntable.fm Social Media Week AfterParty… just bring your iPhone!