Home > Blog > This Can Still Be Our Alamo. Remember January 17th

This Can Still Be Our Alamo. Remember January 17th

January 18, 2012 was a historical day for the Internet, but it could have also been a turning point America. Websites like Reddit, Wikipedia, and even Tech.Li went dark in protest against online piracy bills PIPA & SOPA . And undoubtably more powerful than that were the more than 13 million Internet users who wrote, emailed, and tweeted their policymakers letting them know that hey wouldn’t sit by as the government infringed upon Internet freedom.

Younger generations who understand the vital role the Internet plays in our economy woke up from their (our) political coma and unlike the #Occupy movement before it, spoke out with a clear and concise message.

And it worked. Under pressure from their constituents, lawmakers abandoned ship and switched their stance on the controversial bills. Even TTTTT co-sponsor, Sen. Orrin Hatch (R-Utah) announced he would no longer support the Protect IP Act. According to a statement on his Facebook page, Senator Marco Rubio (R.-Fla.) also withdrew his support for PIPA because he (conveniently) now believes there are ways to fight piracy “while simultaneously promoting an open, dynamic Internet environment that is ripe for innovation and promotes new technologies.”

Then just hours after Senator Harry Reid (D-NV) announced PROTECT IP vote had been delayed, SOPA sponsor Rep. Lamar Smith (R-TX), announced he would be postponing the consideration of his legislation.

Don’t celebrate just yet. SOPA and PIPA are dead, but even the most optimistic protesters know our fight for Internet freedom isn’t over. Lawmakers will continue to protect corporate interests by quietly stuffing bits and pieces of piracy legislation into unrelated bills. So why did they retreat?

By ‘listening’ and giving us ‘what we want’ lawmakers perpetuated the idea that the bills were the problem, and not them. Like giving a cancer patient Vicodin, our victory only  subsides  our pain, after the excitement fades away, we are still left dying. Our government is still broken, our officials still corrupt and out-of touch . Watching the House ‘debate ‘SOPA, we were given a front row seat to the political charades our officials play every day – protecting corporate interests and campaign funding with ignorant arguments and stubborn arrogance. While valiant and well-intentioned, our protest did not address the real problems, only the most recent symptom.

The ‘victory against SOPA’ was a brilliantly strategic move to subdue the public. They gave us an inch so that when we turn our attention elsewhere, they can take a mile. They let us proclaim this a victory for the people, proof the American government is really FOR the people BY the people – their campaign posters couldn’t have said it better. They know that when our faith in our country is restored, our attention is diverted. They know what January 18, 2012 could have been – it could have been our Alamo. 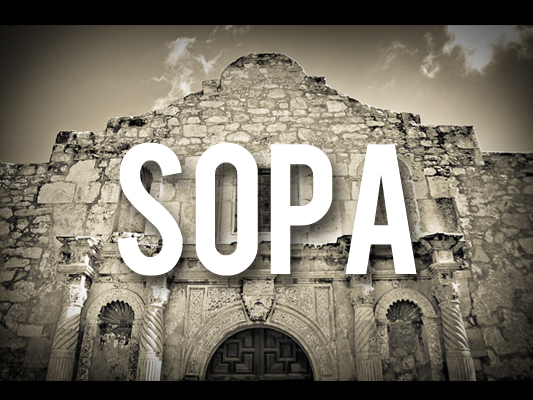 Growing up in Texas, I know the story well:  On February 23, 1836, President General Antonio LÃ³pez de Santa Anna ordered thousands of Mexican troops into (modern day) San Antonio to launch an attack on the Alamo Mission. Despite being vastly outnumbered, the Alamo’ s 200 defenders held off attackers for 13-days before eventually being overpowered by Santa Ana’s army. But what could have been a devastating blow to Texan morale was turned into a battle-cry that emboldened  soliders to defeat the Mexican Army and win their freedom at the  Battle of San Jacinto.

The Battle of the Alamo was THE pivotal event in the Texas Revolution. Loosing the battle helped them to win the war. The Texas army needed to know what they were up against.  They needed to understand the cruelty of their opponents. And most importantly, they needed to be reminded of what they were fighting for.

This can still be our Alamo.

While we didn’t lose the battle, we still saw what we were up against – We saw the power of billions of dollars of corporate lobbying. We watched as the mainstream media outlets ignored the the story in an effort to protect their vested interest. We uncovered some of our favorite technology companies like Apple, Sony, and Microsofts unflinching desire to suppress competition, and industry innovation.

While we didn’t lose the battle, we saw the lengths our opponents are willing to go to. We were reminded of the MPAA and the RIAA’s history of attacking any industry innovation. We heard the ridiculous rhetoric our government officials offered to keep out anyone with a technical knowledge of the Internet from testifying. We laughed in horror as random quotes from MPAA-financed bloggers were admitted in as evidence of the bill’s technical passivity.  We realized there are enough ignorant lawmakers with disregard for our constitution to pass any legislation with enough financial support

Maybe the Texas troops could have won their freedom even if they had not lost the Alamo. Maybe our battle victory won’t hinder us from winning the war.

An Open Letter To Entrepreneurs and Mentors