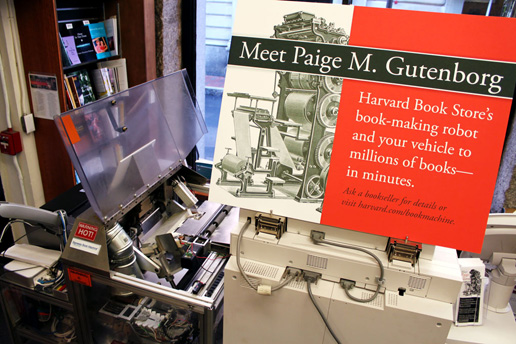 It’s now even safer to assume that the Harvard Book Store has the most expansive selection on any campus. Recently Google teamed up with the university to provide an on-demand book printing machine, named Paige M. Gutenborg, that has access to almost five million titles in the public domain, including many out of print books.

The machine pulls files from Google and prints them at less than a penny per page, though titles at the Harvard Bookstore cost around $14. Titles printed are bound with full color covers, and look nearly identical to their professionally-printed counterparts. Check out the painful but informative video below for more information on the kind of titles Paige is able to print.

Google books aren’t the only titles the machine can print. Anybody can bring files from home and print paperback copies of their own writing. There’s even an option for these custom books to be left for sale on the machine and on Harvard’s website, if the author chooses. Authors can set the price, retain all rights, and have the right to sell the Harvard printed books in any manner they like. Harvard even offers a 25% discount on any order of two-hundred books or more.

The machine was introduced by On Demand Books in 2008 and generally referred to as the Espresso Book Machine. Dane Neller, the company’s CEO, explained the best thing about the technology is that it “radically decentralizes the marketplace for the distribution of books.”

As a writer who has had a few attempts at self-publication, both in print and on Amazon’s Kindle store, the Espresso Book Machine sounds like an intriguing alternative. The author gets complete creative control over their book’s content and how it’s manufactured, as well as the ability to sell it both digitally and physically to customers on-demand. The price, while not exactly cheap, certainly doesn’t seem high enough to deter the more enthusiastic novelist.

Either way it’s great news; I can finally get around to selling my twelve part series of vampire romance novels.

Ad in my head: “Not feeling like waiting for Amazon? WantÂ your bookÂ today, without the need to returnÂ it againÂ to your local library before youÂ finish reading? Print one to keep now!”