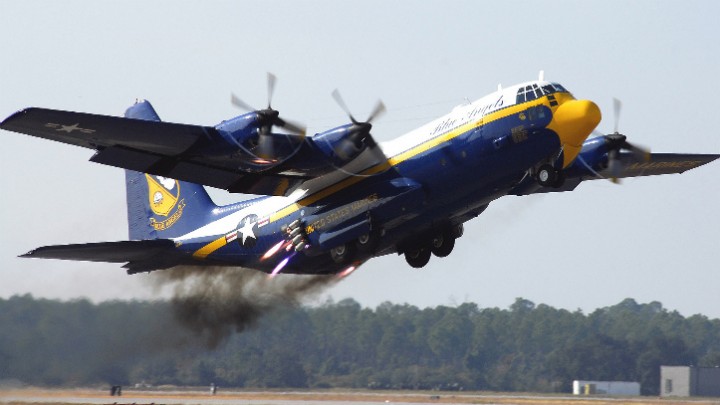 I’ve never been familiar with the U.S. military. No one close to me has served in active duty. I frequently get the ranks of the military confused. Start mentioning the F/A 18 and C-130 and then you totally lose me.

So when I was assigned to write a piece on the arrival of the Blue Angels landing at Spirit of St. Louis Airport on Thursday, I wasn’t sure exactly what I was getting into.

A little bit of background information: The Blue Angels were in town as part of the St. Louis Air Show and Stem Expo, which will take place on Saturday and Sunday out at Spirit of St. Louis Airport. Who are they? Based in Pensacola, Fla., the Blue Angels are the U.S. Navy’s flight demonstration squad.  Founded in 1946, the group flies across the country to perform aeronautical acrobatics and has performed for over 250 million people since its inception.

The Blue Angels arrived in two different blocks.  Slightly after 9 a.m., a plane carrying the majority of the crew members (named Fat Albert) arrived – and with a grand entrance too, flying in a circle around the runways a couple of times before finally landing. 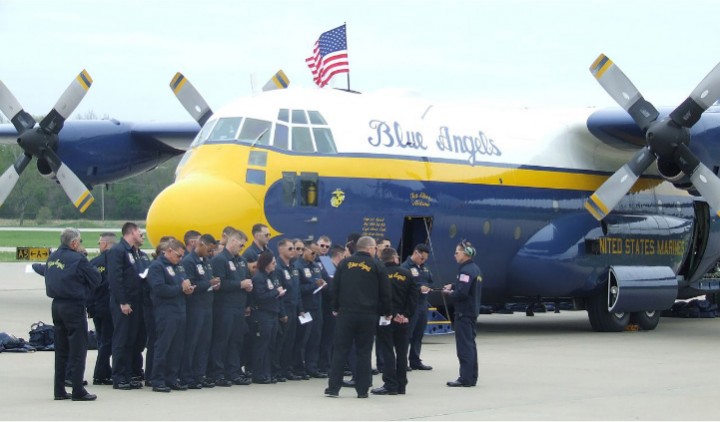 Once the plane landed and parked on the tarmac, the soldiers got out one by one and met for a debriefing. They then appeared to hop in rental cars around the plane and were whisked away. Who knows what they were debriefing. Top secret stuff? Perhaps.

Then about a half hour or so later, six different small jets arrived in a pyramid formation before breaking off in the air to land one by one. The planes then lined up in a row and the pilots, in unison, took off their helmets in highly choreographed fashion and climbed off their respective jets.

The media portion was – as I would expect from a military event – highly regimented. Several different members of the media were assigned to one of the jets to talk to Blue Angels. I have been a writer professionally for several years, covering things as esoteric as wireless bandwidth and byzantine financial products.

But what was I going to ask here? “So, how do you fly a plane?”  I felt totally unprepared. Even, dare I say, slightly unpatriotic?

The guy that I was assigned to was Maj. Mike Van Wyk, who actually flew Fat Albert from Pensacola. He joined the Blue Angels in September of 2012. Fortunately, he couldn’t have been more cordial. He told the small group his interest in flying planes began in second grade when he went to an airshow in Ohio where he was living at the time. He got to hop aboard a C-130 aircraft – like Fat Albert— and knew since then he wanted to fly one of those for his career.

“Now I get to fly C-130 in front of children around the country and try to inspire them as well,” he said.

I asked Van Wyk the difference between flying a small jet and flying a plane such as Fat Albert. He said people in the military pick a “track” and then generally stick with that type of plane during their time in service. He did note that he could land many different aircrafts in an emergency, so if I’m on a commercial flight with him, I’ll feel slightly more at ease.

Later he noted that less than one percent of the American population is active duty, and that the Blue Angels are around to connect the public more with the armed forces. Fortunately, an opportunity like the St. Louis Air Show give people not just an entertaining show, but also gives people a deeper look at the people who serve our country.

So I thought The Blue Angels event would embarrass me. But instead, they are around for people like me. It may sound phony and cliché—but I came away with a better understanding and appreciation for people in the military.