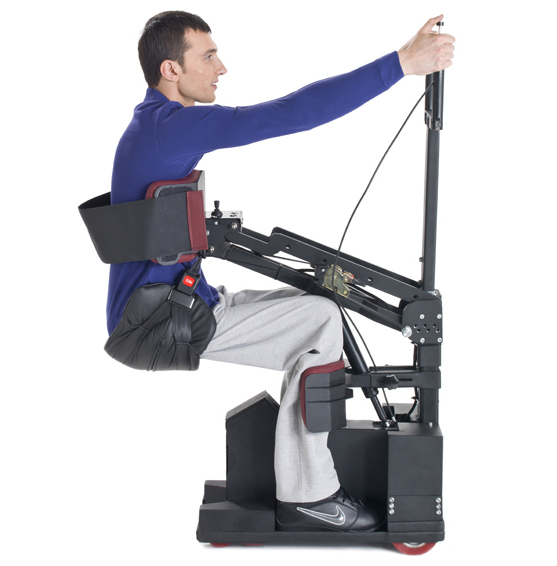 Turkish research and development company AMS Mekatronic has created an entirely new device to help mobilize the disabled. The Tek Robotic Mobilization Device (or RMD) allows the disabled to stand from a sitting position and balance on their feet with minimal effort using robotic harness technology. But the device doesn’t just allow its user to stand up, it enables them to move about their environment in a comfortable, upright position. The company’s website stresses the RMD’s place as a brand new platform, distancing it from the 100 year-old wheelchair.

The device can be maneuvered to its user with a small remote, allowing them to strap in easily from a sitting position. The user sits on a sort of swing seat that they can manually crank into place. By pulling on two handlebars, the user is easily hoisted into a standing position, where they can then use a small joystick mounted on the RMD (or the separate remote control) to navigate the machine through spaces that bulkier wheelchairs might not be able to go. The rigging of the RMD lets its user to sit or stand at any time, dynamically giving them the ability to rest naturally on surfaces like chairs or stools.

The RMD is mounted from the back as opposed to the problematic front-mounting required for wheelchairs. Users can remain wherever they’re currently sitting and lock themselves into the device, instead of having to lift themselves up with their arms and spin 180 degrees to maneuver into place. The biggest advantage of a back-mounting device is that it’s safer and doesn’t require a second person to accomplish the task of getting into position. One noted example of back mounting’s significant advantage is when it comes to using the bathroom, a process made very difficult by dismounting a wheelchair.

The website points out the device’s advantage over other upright walking aids, like canes and walkers. The RMD allows its user to stand in a naturally upright position, as opposed to the posture of leaning forward that occurs with other devices. It also helps its user balance when getting up and standing, and additionally leaves its user with their hands free to function as anyone else would while standing.

The device seems like it could be a life changing tool for anyone with mobility problems, though there’s no word yet on when or at what price the RMD will be commercially available.