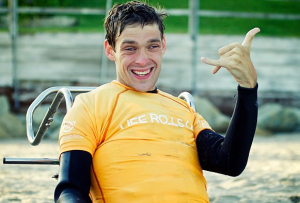 Last year when Oprah Winfrey left her show after 25 years to launch OWN (Oprah Winfrey Network) she had an online contest for ordinary, Oprah lovin’ folks to have their own show on her network.  The top entrants then appeared on a reality show on the OWN network where they competed in a series of tasks related to running their own show.

Each week a contestant was eliminated until the winner was crowned and went on to have their own show.

Zach Anner was a unique contestant in that he has cerebral palsy which, as he says, is the “sexiest of all the palsies.”  Anner’s sense of humor and engaging personality made him an Internet favorite overnight and his video he shot to apply for the contest appeared everywhere on the Internet:

After winning the show, Anner went on to appear on the OWN network for one season starring in his own travel show:

I sat down to talk to Zach at SXSW and here we talked about working with Oprah:

Oprah’s Harpo Studio is based in Chicago (along with Techli) and Anner shared his (very correct) views on the city: