Does just the thought of a perfectly puffed SoufflÃ© make you make you salivate? Do you braise short ribs in your sleep? Could you go plate to plate with the best of them? Then this Startup Smackdown is for you! I’ll be comparing two competitors in the foodie space offering recipes and sometimes, a whole lot more.

Author note: When I first started researching this article, I also looked at gojee but decided that it was an orange thrown into an apple cart with Culinary Culture and Taysti. Gojee is visually stunning and made me long for an edible internet but they also made me jump to different sites and blogs to get the full recipe, which was an annoyance.

Culinary Culture: When I first went to their site, I noticed the easy-to-find ‘Sign Up’ button and underneath it was a panel that gave a simple explanation of Culinary Culture — sharing recipes with friends, starting local culinary events and reviewing your favorite eateries. Culinary Culture helps you find recommendations by members of the “community,” schedule events with your “community” friends, browse the message boards, and, of course, peruse recipes.

After I registered as a new user, I was immediately welcomed via email in a message that walked me through its functions and processes. The site itself is easy to navigate and I found it to be pretty intuitive. It’s not as slick or clean as it could be but it has a warm ‘cozy’  feeling with plenty of pictures of  food, people and  places.

Taysti:  I was immediately impressed with Taysti’s clean and crisp design  with some beautiful pictures in the corner. Upon entering, you’re prompted to sign up to create an online cookbook, share your food life, and connect with other food lovers.

After registering, I did not receive a welcome email which left me unsure of where to go and what to do other than connecting my Facebook and Twitter accounts.  At this point, my site was mostly bare except for the recipe section  which is arguably the most important section. Honestly with an empty ‘food feed’ or my cookbook, I felt a little short-changed.  Since I went through the process of linking my social accounts,  I assumed I woud be informed which of my contacts were currently using Taysti, but instead I had to find contacts by arduously typing in individual email adresses. Fun!

I have to say that the site has potential, but with the sparse content, my experience was lacking.  And in the final blow: When I finally did manage to come to a page with content  — the recipes — the first 10 did not provide images which just adds to the emptiness and my dissapointment.

Winner: Round 1 goes to Culinary Culture. It is easy to get started and has pictures everywhere. If I had a network of friends using Taysti and had some immediate content, it may have been a different story.

Both sites offer recipes, but Taysti had fewer than 100 accessible to me so I evaluated the sites’ recipes based on the following criteria:

Culinary Culture: Some recipes are displayed in the featured section and the rest are accessible by search. There are tons recipes that can be found  by keywords and sorted by relevance, difficulty and date. My only problem here was the lack of a difficulty rating on the actual recipes so I’m not really sure how difficulty is factored into the search algorithm. 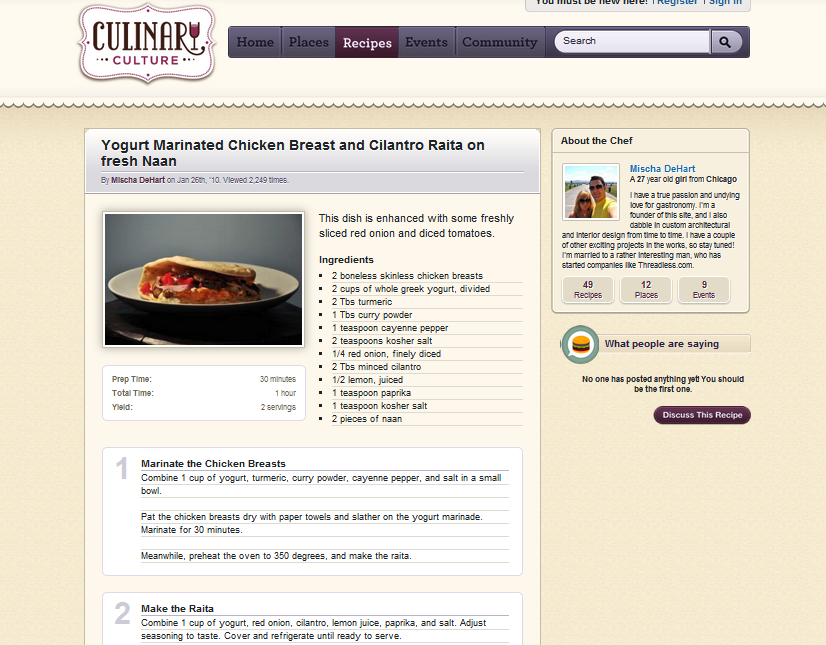 Each recipe includes prep time, total time and serving size. The instructions are clearly laid out with distinct steps which make following the recipe a breeze. Again, I would like to have some indication on the level of difficulty, which isn’t available in the recipe detail, and there is no community rating for the recipe. One plus is the comment box available to the person submitting the recipe to add helpful notes.

Taysti: No pictures for some of the recipes, bad start. You can search by category e.g. lunch, but you can’t search by difficulty, which would be a nice feature to add especially since each recipe detail contains the information. 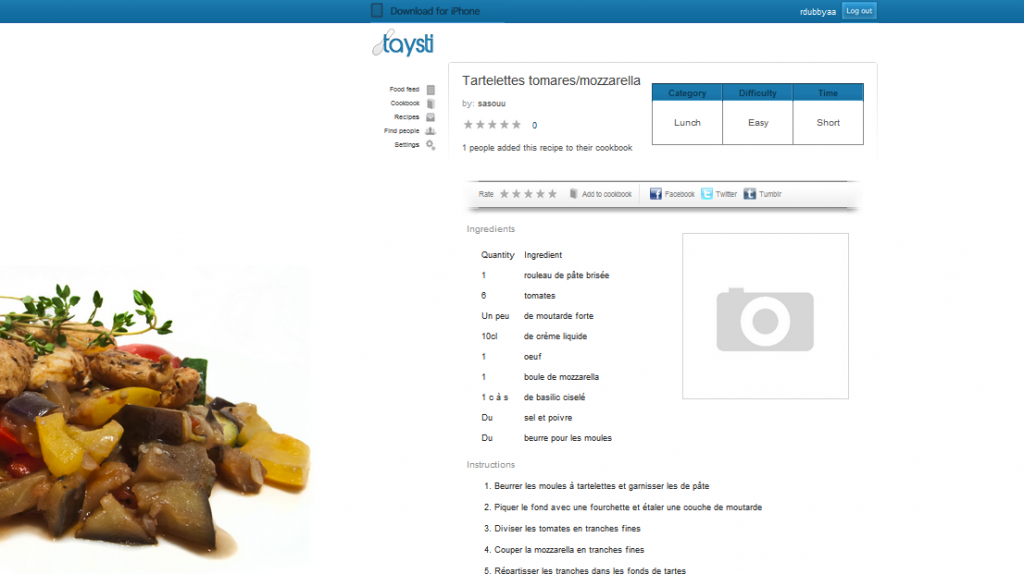 I did like the general layout of each recipe page; they list the category, the difficulty and the time. Time is classified as short, medium or long rather than an actual time given in minutes or hours. This appeals to me, but will probably drive some folks crazy.

The recipe instructions lacked consistency – some listed in discrete steps, others in one lump paragraph. It also took me a while to figure out how to add a recipe, because in order to contribute,  you have to add your recipe through your own cookbook. The lack of clarity makes me wonder if the instructions were partly to blame for the lack of recipe content.

Taysti uses a rating system based on five stars and they also tell you how many users have added a particular recipe to their “cookbook” which is a nice detail.

Winner: Round 2 goes to Culinary Culture for number of recipes and general ease of use. Did I mention pictures?

Culinary Culture: There is the option to create events, both live and virtual which is interest. Their discussion board  looked pretty active and is a nice addition for cultivating community.  I also liked that I was able to characterize my cooking skill level in my profile.

Taysti:  They offered a food feed, but mine was empt. You are given the option to create a virtual cookbook with a built-in a search function and Taysti also has an iPhone app for cooks on the go.

Winner: Round 3 goes to Culinary Culture for additional content and community interaction.

Congratulations to Culinary Culture – winner of the title and all three rounds!