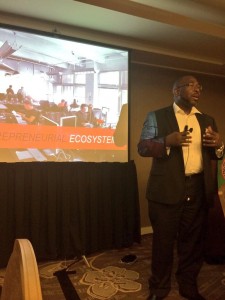 SAN FRANCISCO – No matter what part of the world a person may reside, St. Louisans, whether natives or transplants, tend to seek each other out in solidarity when they have the chance.

There is no exception in the technology capital of the world. On Wednesday night, a contingent of Washington University alumni living and working in the San Francisco Bay Area met with a group of 21 different St. Louis startup leaders over dinner and drinks. The dinner was hosted by the university’s alumni group.

As part of the dinner, Dedric Carter, the newly appointed associate vice chancellor for innovation and entrepreneurship at Washington University, discussed the growing entrepreneurial might of the startup community in St. Louis. One recent report by Kauffman Foundation, entitled “Examining the Connections Within The Startup Ecosystem: A Case Study of St. Louis,” indicated that St. Louis has an effective startup ecosystem due to entrepreneurs connecting with each other as well as adequately connecting with support organizations such as Arch Grants, IT Entrepreneur Network and 1 Million Cups, a project of the foundation.

Washington University has a history of building entrepreneurs. In 2001, the university opened the Skandalaris Center, the university’s main center for entrepreneurship. Today, there are approximately 80 different courses in entrepreneurship as well as a wide variety of different community programs, such as the long-standing Olin Cup Business Competition. Many recent St. Louis startup successes, such as Answers.com and Yurbuds, were co-founded by Washington University alumni.

One attendee, Bob Frick, the former Vice Chairman of Bank of America and a trustee with Washington University, indicated in an interview that he was incredibly pleased with the talent coming out of the St. Louis area. Frick, who has served on the board of more than 20 startup companies since leaving his post, said that events bringing startups to the San Francisco area allow him to connect with the new wave of great entrepreneurs in the area without having to commit to burdensome travel.

“It is very hard to thoroughly communicate business models halfway across the country,” Frick said. “These types of events allow startups to rub elbows with the people that can help guide their businesses toward the future.”

The dinner came on the heels of a busy day for the St. Louis contingent of entrepreneurs meeting with business partners, potential investors, with some companies even looking to expand into the area. Many of the entrepreneurs had four, five, even six meetings throughout the day, with most of them continuing an equally hectic schedule into Thursday.

One of the highlights of the trip for the entrepreneurs was Tuesday night’s departing flight, which was Southwest Airlines’ first ever nonstop service to San Francisco. Many of the companies as part of the trip were focused on technology, however BioGenerator, a bioscience incubator located in St. Louis, also brought along six firms.

As part of the trip, the leaders of five of the 21 companies — Juristat, RoverTown, Pixel Press, aisle411 and Better Weekdays – each pitched their companies for two minutes over the flight attendant intercom, with passengers then receiving the opportunity to vote for the company they would most likely invest in. The winners were Matthew Kulig from aisle411 and Chris Motley from Better Weekdays, who each won a $75 travel voucher from the airline.

The trip was organized by Accelerate STL, a joint partnership between the St. Louis Regional Chamber and the St. Louis Economic Development Partnership. According to Reagan, Southwest Airlines approached him and other chamber officials a while back with interest of expanding the network, and later his group, among others, strongly advocated for nonstop service to San Francisco in part to better connect the Valley to St. Louis’ growing technology scene.