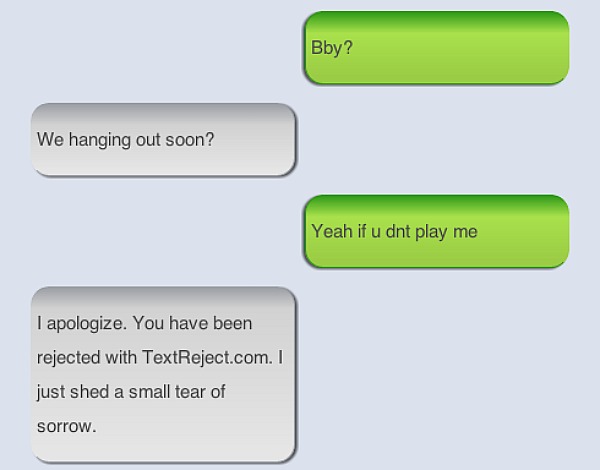 The idea for Text Reject, a contemporary spin on the popular rejection hotlines, happened as most good ideas do: at Steak’N Shake over college break. In just a few short months, the concept has grown from a weekend project to become a semifinalist in the SXSW Student Startup Madness Competition.

Text Reject was built by Andrew Hess and Philip Thomas, who are both students at Washington University in St. Louis. The idea came to the duo when they were in line at the popular burger joint. Thomas says that after a friend was asked for their phone number during the outing, the team realized that there had to be a better way to offer a lighter let down between giving a real phone number and denying the request in person. 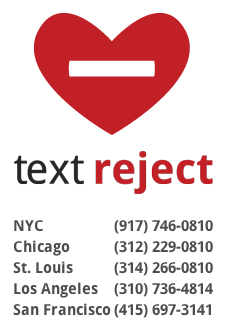 Hess and Thomas, who met at WashU’s Tech Entrepreneurs club, got to work building a solution on the Twilio api. Since the app’s launch, over 400 text rejection messages have been sent from local numbers in New York City, Chicago, St. Louis, Los Angeles, and San Francisco.

The app’s early success has been a total surprise, according to Thomas. “The engineering school has been very supportive,” he continued. Text Reject was the first app launched through the Discovery Competition held by the WashU School of Engineering.

The team discovered that they were chosen as one of 32 semifinalists in the SXSW Student Startup Madness Competition when they were out to dinner with the team from Cultivation Capital. “We didn’t know that we were picked when they were congratulating us. We pulled up the information on the site, and we were listed,” said Thomas. “To present at SXSW would be a great opportunity”.

No matter what the outcome in the competition, the Text Reject team is planning to monetize the app and turn it into a viable company. “We’re experimenting with sponsored rejections,” said Thomas. “We’re looking for what sticks right now, and we are exploring many options,” he continued.

The php application for Text Reject is available as an open source project on Github. The php app is hosted on heroku and built on a wp engine with twilio.