A user on the NeoGAF forums has uncovered a Sony patent that will allow console makers to disrupt your gaming sessions with startling, brief advertisements. Sony filed a patent for the technology nearly a year ago, and its discovery has gamers everywhere clutching their current generation consoles in terror. 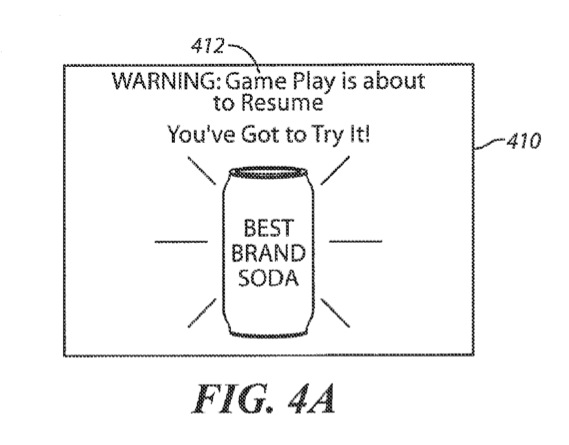 The patent details a process in which a game will “slow down,” indicating the gamer of an impending advertisement and allowing them to “get ready for the commercial” (i.e. take a bathroom break). Once the ad has finished playing, the game will resume a few seconds before it left off, slow enough for “the user to remember where he or she was in the game.” Based on the wording it sounds like even Sony realizes how jarring an involuntary commercial interruption will be for gamers.

Advertisements in video games have generally come in the semi-tolerable and less intrusive form of product placement, where posters, cars, or other random objects exist idly within the world of the game. In the patent Sony refers to its new in-your-face advertising technology as an evolution of the kind of gaming advertising we have today, akin to the advertisements we see everyday on TV.

The only problem with comparing these interruptions to television commercials is that games, whose playtimes often exceed a dozen of hours, are much closer to the experience of viewing a film. Just think about going to the theater to see The Dark Knight Rises this summer, and right before Batman’s about to bash in Bane’s face, a pre-commercial warning starts scrolling across the top of the screen, followed by an ad for Star Wars Kinect. There would be full-on a nerd riot.

Games are all about immersion and as a gamer I can’t imagine anything that would pull me out of a nice long session of Max Payne 3 than a screaming Mountain Dew ad.

Before you put down your controller to reach for whatever pitchfork’s closest to you, it’s important to remember that this is only a patent after all. But the fact that it was considered enough to be filed is still disturbing to me as a gamer. Let’s just hope this nonsense technology stays that way – deep in the filing cabinet and far away from future consoles.