Home > Blog > Does Your Startup Have a Social Media Persona? 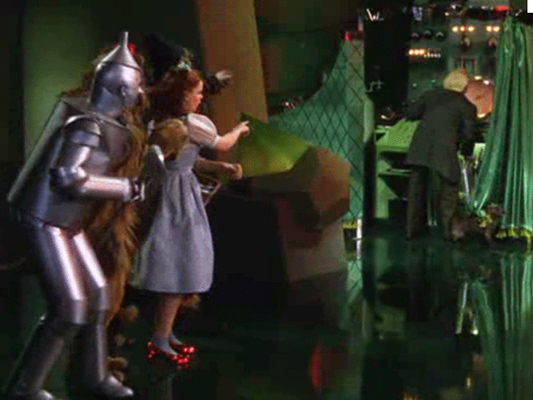 Does Your Startup Have a Social Media Persona? 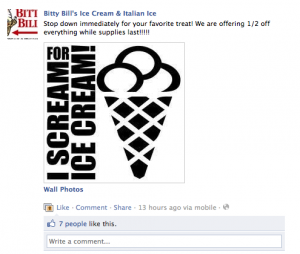 Recently I was scrolling through my News Feed on Facebook and I stumbled upon a post by the local ice cream stand, Bitty Bill’s. Bitty Bill’s is owned and operated by Bill Sweeney, an entrepreneur who recognizes the importance creating a social media persona for his brand. I was delighted to discover that for the rest of the day everything in the stand would be 50% off.

A few hours later I took a drive to the stand with some family members. Without hesitation, we all checked-in and instantly the Bitty Bill’s brand was all over our Facebook feeds. It’s rare to see a small business utilizing the free marketing tools of social media, and Bill Sweeny has nailed it.

I love the Bitty Bill’s brand. Everything about the hometown atmosphere, including the amazing ice cream, makes the experience a worthwhile occasion. Sweeney creates what I like to call a “social media persona” for his brand. He is not only an engaging content producer on the Bitty Bill’s Facebook page, but he also has a clear and decisive voice in his target market of hometown friends and family on Facebook. 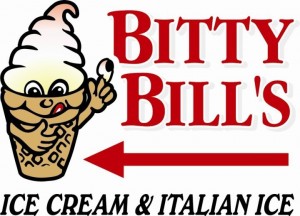 Bitty Bill’s is located in the small town of Moosic, Pennsylvania. Moosic is a quiet suburban town outside of Scranton, Pa (home of NBC’s The Office) with a population of about 5,700 people. Through the medium of social media Bill has managed to get 1,725 “likes” and 132 check-in’s on the Bitty Bill’s Facebook page; impressive numbers for a small town family business.

The problem that many business owners, social media consultants, and startups fail to understand is that a social media persona is only as effective as its human counter-part. Sweeney not only creates and interacts with customers on the Bitty Bill ‘s brand page, but he also communicates with customers on his own personal Facebook account as well as in person at various venues around town.

“Social Media allows you to build relationships that last. It’s just as important if not more to make yourself part of your customer’s life. The people who follow me on Facebook are not just my customers, they are my friends,” explained Sweeney when asked how social media played a roll in his business.

This is the secret recipe to social media marketing that many people fail to understand. Without the human counter-part to the brand, the audience will not trust the brand’s social media persona. Customers want to know who the “man behind the curtain” is before they can trust the brand itself.