When I walked into the DePaul Student Center last Saturday for Social Dev Camp, I expected to see hoards of scrawny 20-something guys with iPads and flannel (forgive me if I’m jaded). Alas, this was definitely not the case. The ages of attendees ranged from early twenties to mid-sixties. People had traveled from all over the country to attend SDCChi, despite the brewing hurricane that was predicted to squash Manhattan. I was surprised to see the amount of campers who probably had grandchildren, most likely because my grandparents think Facebook is Satan on a screen. They were not afraid to ask questions and dominated the UNconference discussions. Needless to say I was impressed, and my notion that my generation rules the digital space is up in flames. 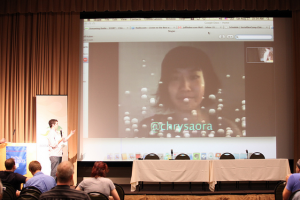 Friday night, the Hackathon kicked off at Noble Tree Coffee & Tea. The hackers worked all night until the official start of the conference Saturday morning. Starting off the conference was Groupon’s Director of Product Management Brett Keintz. Keintz discussed the development of Groupon Now, their new instantaneous deal app. The day was brimming with interesting and inspiring speakers, like Christina Xu (presenting via Skype due to Irene), a trustee of The Awesome Foundation. With 20 chapters spanning three continents, each member of the normally ten-person chapter gives $1,000 a month of their own money to deserving “crazy ideas.” They have funded a giant balloon-powered camera that helps underprivileged and unrecognized communities create maps of their towns. They have also helped create Chicago’s “Little Free Libraries,” tiny libraries the size of newspaper racks around the city.

However, the UNconference sessions seemed to be the crowd favorite. Held in DePaul classrooms, the sessions were round table discussions about topics that had been voted on by campers. The loose structure and moderation made for some very interesting and thought-provoking discussions. Being especially relevant to me, I attended a B2B Startup session. A very cool aspect of the UNconference was that conference speakers also attended and participated just like regular attendees. I sat next to speaker Sundeep Kapur, the creator of Email Yogi. Journalists, professors, Motorola (Googlerola?) executives, as well as students participated. Being a part of a very educated yet diverse discussion was amazing and definitely beneficial to my understanding of B2B businesses. 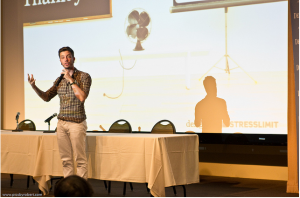 The keynote speakers were also excellent. Julian Smith, author of Trust Agents, spoke on Saturday. His speech focused on product and brand visibility. You might have launched your app and Twitter account- but no one cares. If you’re not the leader in the industry, you must position yourself in a different way to attract customers. It is important to speak to people as people, not as a company. Smith also said that we’ll never need more advertising, just more connections to the community, which was particularly resonant. Smith’s discussion ended with only a couple questions from the audience because he “really had to pee.” The Sunday keynote was delivered (via Skype) by Alexis Ohanian, founder of Reddit, Breadpig, and Hipmunk. Ohanian discussed the importance of online communities like he created with Reddit. These days, online communities are just as real, if not more interactive, than real space communities. Getting online communities involved in your idea is necessary to take it mainstream.

From people who have seen the complete rise and supersonic growth of the online social space, to those who have grown up inside of it, ideas were abundant and free-flowing. We can only hope that future events have such a diverse and well-informed crowd, and it definitely seems that SDCChi is on the right track.

The Hackathon was a blast. Who says you can’t find tech talent in Chicago…you just have to know where to look. Props to the Edit Huddle team for winning Best Design. Looking forward to the next steps for Edit Huddle and how we harness crowdsourcing to edit blogs and websites.Â