Chicago-based startup Snapclass wants to help online experts connect with their main audience, enabling them to easily organize and even make some cash off of scheduled web seminars or one-on-one counseling sessions. Online experts can focus on planning and carrying out their upcoming sessions, while leaving the set up and payment processing to Snapclass.

Snapclass was conceived by Scott Mandel and Ryan Nichols in October of 2011. Mandel found himself struggling to find legal information online, either turning up unhelpful YouTube videos or legal documents too long and complicated to decipher. “I just wanted to talk to a real person and get my questions answered,” said Mandel. The CEO soon found the problem of direct and easy access to online experts to be an issue worth solving, and it became the inspiration for pursuing a new online venture.

“I think all good businesses start by trying to solve a real problem and great businesses start by solving real painful problems,” Mendel wrote. “Our goal at Snapclass is to further engagement online. Rather than talking to your followers, talk with them. Have real conversations instantly and connect with people you normally wouldn’t have access to.” 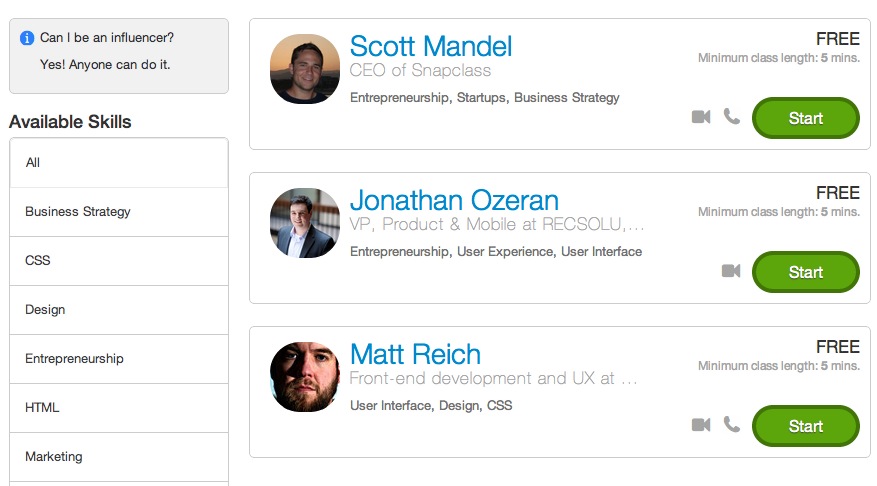 The service has been built to allow any online individual, called an “influencer” by the company, to their specific group of “followers.” According to Snapclass, followers can be customers, fans, readers, or even followers from social networking sites like Twitter. Snapclass is mutually beneficial to both ends, allowing influencers to earn money off of their expertise, and avid followers the opportunity to connect with their favorite online personalities in a meaningful way.

Mandel and Nichols eventually launched the Snapclass beta less than two weeks ago. The service charges 10 or 15 percent of classes that require participants to pay a fee, depending on whether or not the class originates from the influencer’s blog or the Snapclass marketplace. According to Mandel, online conferences will soon be capable of hosting sessions for up to 1,000 attendees.

The Snapclass team is currently bootstrapping out of The COOP in downtown Chicago. Mandel said the company is looking to begin seeking funding in the near future.