SmartThings Transforms Your Home Into A Network Of Gadgets

Imagine your house and the devices within it being truly connected for the first time: your front door locks itself when you leave the house for work in the morning; receiving a new Twitter message dims the lights slightly enough for you to take notice. There are an endless number of applications that can be created through the use of an integrated network of devices, and Minneapolis-based company SmartThings is out to make this dream a reality. 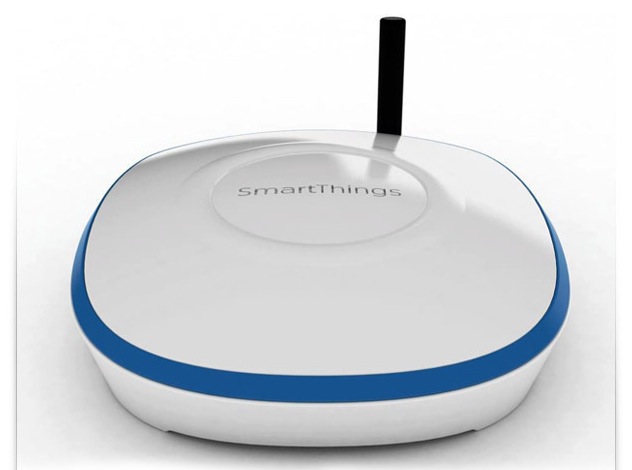 SmartThings has successfully created a platform in which everyday household items can be connected to a network to improve their efficiency and purpose. The platform utilizes power outlets and an array of sensors (open/shut, motion, and presence), all wirelessly connected to a central hub, to create smart household associations never seen before.

In addition to its no-hassle plug-and-play sensors, SmartThings has built a mobile platform called SmartApps that allows users to create, download, and customize how their network of devices interact with one another. Get an early warning on your smartphone if you have a leaky pipe, or have your home automatically optimize itself for energy saving once you walk out the door. The applications of a fully-connected household are truly limitless, and the company will be opening up the platform to developers to spur on even further innovation.

Founder Alex Hawkinson came up with the idea for SmartThings after a frozen pipe burst and flooded the basement of his cabin. Hawkinson struggled to find a solution for real-time temperature monitoring without an internet connection, and decided to come up with a fool-proof adaptive system that anyone could use.

“Our real inspiration came when we realized how intelligent everything in our lives could become through the power of computing in the cloud,” wrote the company. “Installing applications into your real life should be as easy as it is on your phone.”

In the future, connectivity won’t just be limited to motion sensors and outlets. SmartThings plans to sell a plethora of integrated items in its online store, including door locks, thermostats, smoke alarms, moisture sensors, and more. Manufacturers will even be able to implement the technology directly into a product with easy-to-install modules.

SmartThings has just begun a Kickstarter campaign for the project, primarily to raise funding for initial manufacturing of the homebase and sensor system. In its first day SmartThings has raised nearly $80,000 of its $250,000 goal, with plenty of time left to go. For $149, early birds can still get a wireless hub, along with their selection of a few different sensor packages, though they’re going fast. The team estimates that the SmartThings system will be ready for in-home innovation by December of this year.

Thank you Corey, I find it really interesting! now on indiegogo we can also find other awesome smart gadgets for smart homes. Hope you’ll enjoy it! http://www.indiegogo.com/projects/wattio-save-energy-and-money-at-home