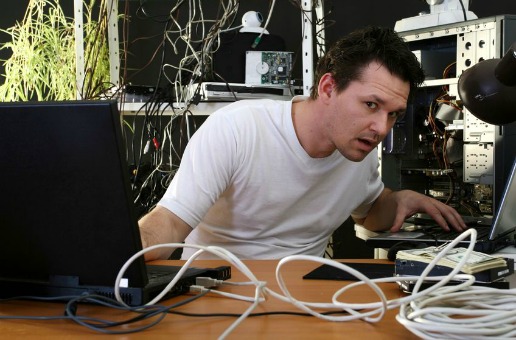 Hackathons are starting to piss off Treehouse founder and CEO Ryan Carson . It’s not that he’s against some of the hallmarks of geek culture though. The guy founded and sold the Future of Web Apps and Future of Web Design conferences for an undisclosed amount. Both were the see and be seen events of the web 2.0 era. Now that Facebook has gone public, Web 2.0 has officially graduated to be just the web as we know it.

What Carson is angry about is not internet culture on the whole, but rather the commodification and appropriation of hacker culture for the benefit of business interests. All night coding marathons known as hackathons were once a casual way for hackers to get together and solve a complex problem overnight. These hacker gatherings became marathon sessions because they cared enough to keep coding into the night. Now, hackathons are heavily attended events sponsored by technology companies who come up with gimmicks to get the most talented and enthusiastic software developers to use a new API.

Events like Photo Hack Day, Music Hack Day, and the Hacker Olympics are hosted by companies like Aviary, GitHub, and Twilio. Given the serious developer talent shortage in the technology industry, what better way to recruit the most dedicated and creative hackers than to put them all in a giant room for the weekend and feed them cheap pizza? It’s a business recruiter’s dream. But as Carson notes in a post on his personal blog, “developers aren’t monkeys in a cage.”

There are many problematic stereotypes in the startup scene right now. Some of them include the geeks vs. greedy non-technical co-founders, the frat boy brogrammers, and the wantrapreneurs who tell everyone about their company before they have a prototype. Many of these stereotypes paint geeks as the heroes. However, Carson argues that hackathons are increasingly set up to take advantage of geeks:

They’ve got families, bills to pay and every other pressure that normal people do. They don’t want to drink Red Bull all night and sleep under their desks. Next time someone asks if you want to crash at their hacker mansion for the summer (which has a ppol, BBQ and pool table!) or team up for a 24-hour hackathon, think twice. They’re probably just trying to cash in on your youth and optimism.

Given that the most popular hackathon in the industry took place last weekend, the comment thread on Carson’s Hacker News link went crazy. The post generated 93 comments, with most commenters expressing that they did not feel exploited at commercially sponsored hackathons. Many also noted that they do want to drink Red Bull all night, and that hackathons are a great way to socialize with people who have similar creative interests.

The problem with the discussion is that the Hacker News community is a self-selected group of developers and technologists who most likely fall in line with the rhetoric of Paul Graham coming out of his startup accelerator Y Combinator. Graham’s vision of the startup life skews more toward the young and talented with nothing to lose and no dependents to pay for. In short, Graham is the king of the hackers.

Carson on the other hand is a keen businessman who can talk openly about the motivations of all players in the startup ecosystem. The comments on Carson’s original post included many industry veterans who have grown out of their passionate 20’s and into real life, where mortgages and student loan repayments are a reality of life. It’s not that they don’t love what they do, but they’de rather get out and mingle with people who don’t care about APIs on a weekend night.

Carson is right. Hackers are people too. Passion for their craft is a great thing, but if it’s the only thing, hackers may be an easy target for people trying to take advantage of their enthusiasm.