A startup with a novel twist on the classic jukeboxes that are now often left to decay in greasy spoon diners and dive bars raised $1.2 million in a funding round led by Google Ventures and Detroit Venture Partners. 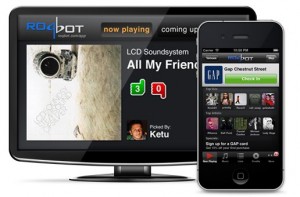 The idea behind Roqbot (pronounced like “rock bot”) is to let customers at a venue crowdsource the background music using their phones. At the moment, service levels for businesses include a hardware-free option that streams from a browser or iPod Touch, and a plan that includes hardware that displays music information and local specials on a screen. And if patrons are only picking annoying tunes, well, the owners can spike the playlist to make sure it doesn’t get too far off track.

“We encourage the venue to create the music library that fits their vibe,” said Roqbot co-founder Garrett Dodge, in an email message. “We love the experience of the highly curated CD jukeboxes and want to enable a similar experience, at the business owner’s discretion.”

The financial model is similar to a traditional jukebox – maybe, given the technological changes it’s trying to address, even too similar: In addition to subscription services, the company charges users for credits after a threshold of free plays. Especially philosophical listeners – unlikely to be found, perhaps, in the rowdy venues Roqbot is marketing to — might wonder whether the platform’s millions of songs introduce an agony of choice that wasn’t present in jukeboxes with a limited selection of tunes.

There are no plans to retrofit classic jukeboxes with cloud technology, Dodge said, since the interface has been shifted to customers’ phones.

“We make it even easier for businesses to provide a music experience that will keep customers coming back,” Dodge said, in a press release. “With just a few clicks, a bar can have a playlist that dynamically adjusts to customer feedback while still letting the business owner maintain control. This way, the music engages all of a businesses’ customers, not just the person putting dollars into the jukebox.”

Some investors are also excited that the company is doing business in Detroit, which startup enthusiasts in the area say is home to a burgeoning tech scene.

“The future of music in public venues will be a social and mobile experience, and we’re excited to back Roqbot as the leader in this exciting space,” said Josh Linkner, CEO and Managing Partner of Detroit Venture Partners, a venture capital firm that is rebuilding Detroit through entrepreneurial fire by funding early stage tech companies. “We’re thrilled that Roqbot continues to expand in Silicon Valley and is also hiring in downtown Detroit to accelerate the city’s growing tech core.”

Roqbot received an accolade as the best music tech company in the 2011 South By Southwest Accelerator.