Researchers at the University of Nevada in Reno have come up with a novel navigation method for the visually impaired. The new technology uses a smartphone application that guides its user by providing instructions based on architectural maps.

The application, called Navatar, was created to be as low cost and accessible as possible, utilizing many features already available in smartphones today. The software has access to many readily available architectural maps of buildings, and uses 2D versions of them to direct a visually impaired user with step by step instructions.

Accelerometers and compass utilities inside the phone provide the program with the correct location and direction of the user moving within the building, allowing them to check in at important landmarks to keep track of their progress.

“To synchronize the location, our system combines probabilistic algorithms and the natural capabilities of people with visual impairments to detect landmarks in their environment through touch, such as corridor intersections, doors, stairs and elevators,” said Eelke Folmer, an assistant professor in the Department of Computer Science and Engineering at the university.

While operating the Navatar program, users can confirm the given directions through voice feedback or by interacting with the smartphone’s touch screen. According to Folmer’s website, among six blind and 12 blindfolded participants the Navatar system was able to locate and guide the user within 1.85 meter accuracy.

Folmer recognizes room for improvement in the new technology, and hopes to expand its utility in different environments.

My research is motivated by the belief that a disability can be turned into an innovation driver. When we try to solve interaction design problems for the most extreme users, such as users with visual impairments, there is the potential to discover solutions that may benefit anyone. Though the navigation system was specifically developed for users with visual impairments, it can be used by sighted users as well.

In 2010, Folmer worked on a project to improve physical activity in visually impaired children. Researchers used modified Wii sports games to support vibrotactile feedback that would guide the player’s movements. The games were made freely available for download on a dedicated VI Fit website. 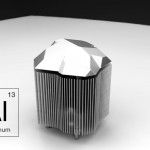