The verdict is in: Wikipedia is running out of admins and editors. The numbers, as reported by the Atlantic, speak for themselves: 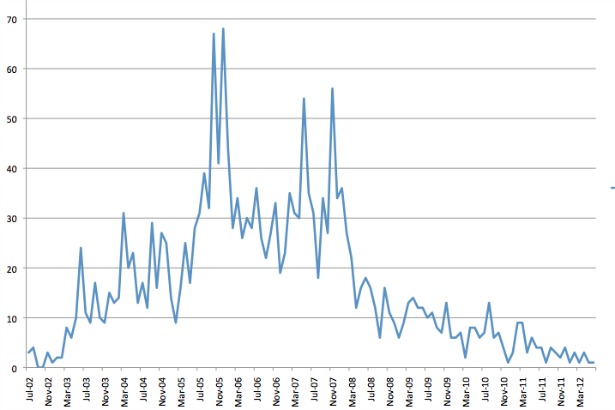 New administrators promoted by Wikipedia every month. Source: The Atlantic

Like global warming’s existence, the prevalence of Wikipedia’s demise is seldom contested. The facts are clear: the number of English Wikipedia editors making five edits or more a month is in decline from a peak of over 50,000 in 2007 to merely 30,000 this year. Sixty-seven administrators were elected by Wikimedia in 2005, with averages sitting comfortably between 40 and 50 per month. Today, that figure hangs in the single digits.

But why it is happening is another story, and a hot one on Reddit at the moment. Reddit readers weighed in on the root causes for many burning their Wiki-loyalty cards. Here’s a brief snapshot: (Wikipedia admins, take notes)

As one Redditer put it,

“There have been several times in the past couple years where I’ve put a genuine interest into improving some Wikipedia articles. It seems like, every time, I’ll get a response back that talks about how my changes didn’t follow the rules, so it got reverted. It got to the point where I dreaded seeing the “1 New Message” thing at the top-right corner after an edit, because it was never good news.”

This seemed to be the number one complaint in the Reddit discussion, voiced repeatedly by many Redditers. Yet, ironically, this is precisely what Wikipedia is fighting against. The site’s editing policy encourages admins to “Fix problems if you can, flag or remove them if you can’t,” outlining various options that one should consider before deleting an article. But from the influx of complaints there leaves heavy doubt as to how many admins actually follow these steps.

Another expressed difficulty navigating around the elaborate rule system to fix incoming concerns:

“I’ve been editing articles on Wikipedia for years and I still have no idea how to do some basic things like report random acts of vandalism that I stumble upon. So yeah, I think the rules are difficult to penetrate.”

At Wikipedia’s dawn many years ago, the amount of information out there seemed limitless. Now, this Redditer expresses doubt as to what will follow the so-called “golden age” in the early 2000s:

“I hate to say it but most of the low hanging fruit has been written. I think this is a big factor that people don’t grasp immediately. There was a golden age in wikipedia authorship (2000-05?) that covered a large portion of what was necessary, and the scarcity of relevant new material has turned the community more insular and protectionist. There are pros and cons to this. On the one hand you don’t want common themes vandalized and jeopardizing the validity of the whole project, on the other you want to encourage scholarly contributions on esoteria. But there is only so much that is necessary aside from popular current events to provide the lion’s share of wikipedia’s value.”

With many of the low-hanging fruit picked, the question then results: what’s next? And as with many collaborative efforts, sometimes the direction is open to interpretation:

“The problem with wikipedia is that that the foundation (ie those under Wales) do not want it to be comprehensive. I believe that all the knowledge imaginable as general knowledge should be there, including popular culture. If an article is too long, then make a separate article for an obscure detail, don’t just say “Oh, we don’t need this much info”.

The issue is the Jimmy wales isn’t allowed to make profit from wikipedia, he makes his money from wikia and he “guides” wikipedia. He has a vested interest in making wikipedia having limited information, but more detail will be pushed to the wikia based sites about a topic, which he puts ads on and makes money off of.”

What Do You Have To Say About This?

In all likelihood, if you are reading this article, you have used Wikipedia at least once in your life. What do you, dear Techli reader, think is the root cause for Wikipedia’s recent editorial shortage? Chime in below. 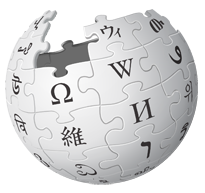 My own interest in contributing to Wikipedia is directly in line with the article’s comments.  The Wikipedia team has positioned itself (previously, at least) as a group of prima donnas.  Ironically, unless you were part of the ‘in crowd’ your content had a dramatically reduced chance of being accepted.  The observation might not be accurate, to be fair, but it is hardly a unique perception. jtpedersen

@JT Pedersen JT, that’s unfortunate to hear! And joining the ‘in’ crowd presents a whole new challenge, one that as writers focused on the content we should not have to face. Wikipedia was all about leveling the field after all, right?

The biggest problem with Wikipedia is that it has this concept that there is only one unique body of human knowledge. In reality everyone views the world differently and so there are 6,000,0000,0000 views. OK, often they largely correspond, but take e.g. a simple instance of whether a list of UK places should start with London. In Scotland this would seem prejudiced, in London it appears obvious. Neither is wrong, but neither are they “right”. I live in a small village, if I were describing places I would start with that village. Likewise a lot of other people who live in smaller towns and villages. So, why should a description of places in the UK only cover the biggest cities? That in itself is biased … London is not the most important place in the UK … where people live is likely the most important place to the most people, but that is different. So, we all naturally have different views, but Wikipedia largely only permits one view, one most important place.

Now, in some areas Wikipedia reflects reality that there are different views. Churches are each given their own pages, poltical parties. But in other areas there are equally strong views opposing each other, but they are forced due to this idea of there only being “one truth” to slog it out to gain control of the “truth” as expressed by the one wikipedia article.

Likewise on Global warming, those who approach it from a scientific stance (like me) want to take out all the assertions that some academics have been expressing about doomsday warming which have no or little evidence to support them. Those who advocate “the precautionary approach (aka alarmism)” … want to include every possible bit that suggests doomsday is upon us and can do so because the green groups are numerous, well organised and have active support from “doomsday merchant” academics. So, Wikipedia is largely devoid of the rational comments from the numerous academics who aren’t alarmists.

However, I see the writer is one of those who think manmade global warming is about to cause amageddon, so that may not be a good example, so let me ask what they think it would be like if Wikipedia had one article called “The Christian Chuch” … and it was left to all the editors of various faiths to devise a single statement of what the only Christian religion in the world was.

Obviously, those with most numbers and/or those with most enthusiasm will tend to assert that their view is correct and very soon the article would be the catholic/protestant or whatever view with many other people extremely irate that not a single positive suggestion of theirs ever makes it in against what they see as the “zealots who run Wikipedia”.

The result is that the majority of people whose views are over-ridden by small groups of zealots give up trying to edit, because common sense can always be out-voted by a well organised & vociferous minority.

@MikeHaseler  No, I don’t think manmade global warming is about to cause armageddon. What a ludicous idea.

You ability to draw this conclusion from my article puzzles me, because nowhere does it even touch on my ideas about this very complicated and controversial subject.

In fact, this article is not about global warming at all. My GW comment was just an analogy and lead-in to show that the number of dwindling Wikipdia editors, like the Earth climate statistics, are evident, though the cause is not undoubtably clear. Hence its controversial nature, and why discussion on the causes is welcome.

As in the case of all things, I support scientific, evidence-based conclusions.

Now on to the actual topic at hand: Wikipedia. Like any joint project, is subject to the viewpoints, biases, and personal flaws of all who edit it. From what you write @MikeHaseler, it sounds like certain groups have monopolized control of its content. Do you have any evidence to support this? I would be very interested.

@MikeHaseler  No, I don’t think manmade global warming is about to cause armageddon. What a ludicous idea! The accusation demonstrates what an emotional topic Global Warming is for many people. Like all scientific studies, the study of global warming should be as unemotional, objective and evidence-based as possible, yet sadly many people spew their armageddon garbage, their preconceptions, and their often erroneous, unsupported claims all over it.

Your ability to draw this doomsayer conclusion about me from the article puzzles me, because nowhere does it even touch on my ideas about this very complicated and controversial subject. Indeed, I am not a climate scientist, and would never have the nerve to draw any conclusions without seeing and understanding the evidence myself. If more people could admit this lack of authority on the subject, we would probably have less doomsdayers and inaccurate public interpretation.

This article is not about global warming at all. My GW comment was just an analogy and lead-in to show that the number of dwindling Wikipedia editors, like the Earth climate statistics, are evident, though the cause is not undoubtably clear. Hence its controversial nature, and why discussion on the causes of why Wikipedia is running out of editors is welcome.

Now on to the actual topic at hand: Wikipedia. Like any joint project, it is subject to the viewpoints, biases, and personal flaws of all who edit it. From what you write Mr. Haseler, it sounds like certain groups have monopolized control of its content. Can you think of any solutions for this problem? I’d be curious to hear them.

Irina Papuc, I’ve done a couple of day of research and come up with some startling statistics on Wikipedia which appear to be new and have certainly changed my perception. Unfortunately, I need to have time to digest these and perhaps do further research to understand what they mean. Your article has been useful, so this is just a note to say  I will try to publish the article on scef.org.uk (although not entirely relevant), but I can’t say when as I’ve got several other things I’m supposed to be working on.