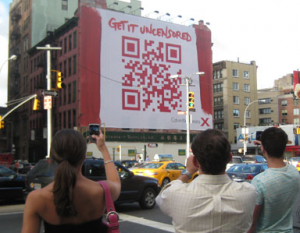 You shouldn’t have to wait for technology to reach critical mass to start using your phone for more than words with friends.

QR codes aren’t dead; their potential is unrealized. There’s no arguing that NFC is a superior technology, but until mobile phones support NFC, there’s no use in stopping people from using QR codes – and I’m not just saying that because I’m employed by a company that uses QR codes.

QR codes are misunderstood, and there’s enough examples of marketers using them incorrectly to back up that theory. A QR code shouldn’t be used as just a shortcut between a print ad and a website. A QR code should enhance an experience, not redirect the user to a promotional website. Anyone who takes the time to scan the code should be rewarded. Encourage your customers to become a part of the experience; don’t just come at them with marketing mumbo jumbo.

NFC is still in its infancy, and once manufacturers get on board, consumers and merchants will still have to worry about NFC standardization. In the mean time, why should we wait to take advantage of QR code marketing opportunities? If anything, QR codes are only helping to familiarize consumers with the idea of integrating smartphones with their shopping habits.