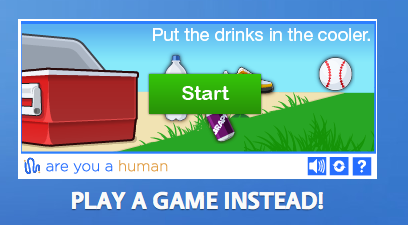 This week Detroit-based company Are You a Human announced PlayThru, its fun alternative to headache inducing CAPTCHA technology. The simple drag and drop games were developed to be dynamic enough to distinguish bots from humans online and fun enough to keep frustrated users from fleeing the registration page.

CAPTCHA works by crowding and distorting the shape of letters in randomly generated phrases to trick automated bots from massively signing up for services. The technology has been used since the early 2000s, and although CAPTCHA is effective at deterring unwanted bots from using a service, its inefficiency sometimes has the same effect on internet users too lazy to put up with the cryptic bot checks.
“Text-based CAPTCHAs are difficult to decipher and easy to break, which forces them to become increasingly more difficult to solve. This vicious cycle makes it frustrating for users, who many times will give up before following through to a site,” Reid Tatoris, COO of Are You a Human, said in a press release Monday.

According to the Detroit company, nearly 25 percent of users abandon the registration process due to a distaste for CAPTCHA. As a result Are You a Human has found a simple alternative for users to pass bot checks in a more entertaining manner. The free service provides a drag and drop game where users can intuitively match items to prove they’re not a bot trying to gain access.

Instead of deciphering blurry, nonsensical phrases, PlayThru tasks users to prove their human identity by preparing a stack of pancakes with butter and syrup, or completing a blank face with eyes, a mustache, and a mouth. The drag and drop gameplay additionally makes the gaming alternative equally comfortable on touch-based mobile devices like smartphones and tablets.

PlayThru has already yielded some impressive results, in some instances improving form submission rates by up to 40 percent. According to Are You a Human, 98 percent of users preferred PlayThru to standard CAPTCHA alternatives.

The free service is available now to any website fed up with torturing its users with blurry text. Check out a demo here to experience the most fun you can probably have proving you’re not a robot on the web.

Zuck Loses Billions As Facebook Shares Sink, But Does It Matter?