Pinterest was easily one of the most talked about social networks at the start of 2012, but the latest statistics from Google Trends show that the site might be losing steam. The social visual bookmarking app exploded with users from October 2011 to mid February 2012, but since then users have stopped pinning as often, with some deleting accounts altogether.

Although some media outlets have attributed the decline in users to the predictable early adopter drop-off, a closer look at the statistics shows that the decline starts when news of the company’s relaxed copyright rules broke. Concerns over Pinterest’s terms of use, specifically ownership of pinned content, caused many dedicated users to delete accounts in fear that they would be held accountable for copyright infringement. 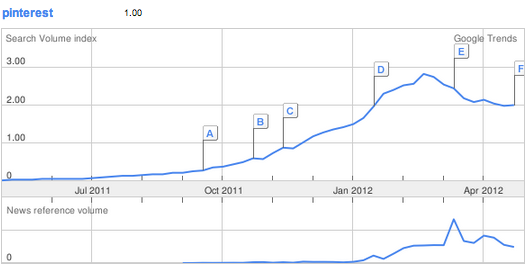 The company amended its terms of service, acceptable use policy, and privacy policy on March 23rd to clarify murky copyright language that made users responsible for copyright infringement. However, traffic statistics show that many users have not returned to the platform since the mass exodus.

The media blitz about Pinterest’s copyright issues may have also stunted growth right at the height of its popularity because potential users were scared to try the service after hearing about it from their friends and family. The main demographic of Pinterest users at the time of the search traffic decline was distinctly not technically savvy, which was the draw of using Pinterest in the first place. Hearing rumors that you will be held libale for copyright infringement for using the service is more than enough reason to scare off this growing user demographic.

The good news for Pinterest is that it continues to be a key content distribution site for marketers who are growing fashion and lifestyle brands. As Pinterest’s user demographic continues to shift, the company is now betting on the recent rise in interest of building upon Pinterest’s platform to increase growth.