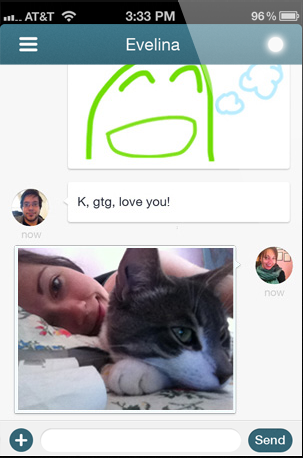 Whether you find the breakout hit Pair to be the perfect long distance relationship manager or a nerd version of forced intimacy, you can’t deny that the app is an early hit.

Since its official launch at Y Combinator’s Demo day, the Pair app has been downloaded over 50,000 times. Despite the hype, the best thing about Pair is not its skyrocketing popularity or its ability to keep couples connected – it’s the perfect startup incubator company.

What makes the perfect startup incubator company anyway? For starters, early traction (check) and hockey stick growth (likely). The five-man team behind Pair originally was accepted to Y Combinator as Maideon, to work on software called CadControl, a tool for 3D designers. According to cofounder Jamie Murai, CadControl was abandoned after it failed to see early traction.

“We basically set some traction goals for ourselves, and said that if we hit those goals, we would continue with our existing product, but if we missed them, we would try something new. Y Combinator is very fast paced, and is a once in lifetime opportunity, so we wanted to take full advantage of it with a product that had a chance to really make a difference.”

Murai noted that Y Combinator cofounder Paul Graham encouraged the team to build something that solves the biggest issue that they all had at that moment. Since they were struggling with being away from their girlfriends, they decided to create Pair.

The official story sounds contrived. Graham has a history of itching to fund dating apps, although Murai insists that Graham did not push them to move forward with a couples app.

“Paul Graham didn’t guide us into this idea. We actually went through about a dozen ideas before settling on this one. We brought a few of them to Paul, and he was lukewarm on them, but when we approached him with the idea for Pair, he was excited about it immediately. I think that’s when we knew we should try pursuing it.”

Graham is also a brilliant storyteller who notoriously coaches his startup brood to spin the motivations behind their products to match a personal story. Of course the point of a great story behind the product is to capture the imaginations of venture capitalists during the feeding frenzy of demo day. Yet with all of the personal stories that go into startup pitches, the best way to cut through the noise may just be to get up on stage and say, “We made this to make money.”

Which brings me to the second reason that Pair is the perfect startup incubator company: it’s built to flip. With no clear revenue strategy (although some have suggested advertising a la De Beers), it’s easy to see how an early acquisition could be the strategy from the beginning. It would be a perfect pickup for mega dating sites like eHarmony or Match who want to extend their businesses into longterm relationships. Seed investors like Y Combinator generate guaranteed returns when they groom their investments to flip fast rather than going long on risky technologies.

Third, the company has to go for low hanging fruit to be the perfect startup incubator company. This is supported by the built-to-flip theory. Grasping for the low hanging fruit in tech generally means developing a piece of software that many people already want because it’s pretty close to things they are already familiar with. Pair at its bare bones is simply a closed messaging app.

When I asked Murai to respond to criticisms in the media that the app is “not intimate enough” to replicate the complexities of a longterm romantic relationship, he responded:

“At the end of the day, knowing that you helped someone improve their relationship is good enough for me. Our task now is to get Pair in as many peoples hands as possible.”

Ok, I get that the company isn’t trying to be the next Apple. There is nothing wrong with building a product with early traction that could easily position itself for acquisition so soon after launch. It worked out for Instagram.