When was the last time you watched a video on your computer or mobile device? According to the latest studies released on online video viewership, chances are you have watched one already today.  The video that you watched was most likely a music video, a cat video, or a cute kid video. I’m no psychic, but I could have predicted this without reading the latest reports on online video viewership. As it turns out, I’d be right.

Advertisers and startups who have spent the last few years  focusing on the online video market are about to see a huge payday. According recent reports released by comscore and Ooyala, 2012 is going to be the breakout year for online video.  Here are some highlights from the reports:

The average viewer watched 22.6 hours of online video over the course of January 2012.

The average online video ad was .4 minutes long, according to comScore. Video ads accounted for 0.9 percent of all minutes spent viewing video online. 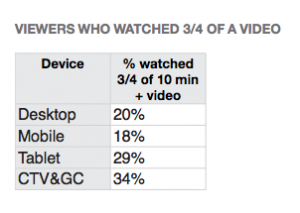 Tablet viewers were found to be more engaged in video than desktop viewers. Viewers of video on tablets were 45% more likely to complete at least 75% of videos played. This is probably because tablet usage skyrockets in the evenings, when people have more leisure time to complete videos.

What does this mean for the future of online video?

Companies that embrace online video for education, content distribution, and entertainment will continue to see their viewership increase as more people watch videos on tablets and mobile devices.

Companies like Ooyala that offer products and services around video content are set up for huge wins in the coming years as the need for video analytics and monetization solutions grow.

Now is the time to start strategizing around online video if you want to take your company to the next level. 2012 will be the breakout year for online video. Don’t let content opportunities like this pass you by, or you’ll have to spend extra time and money to catch up to your competitors.