NowMaid: Do You Trust The Person Who Cleans Your House? 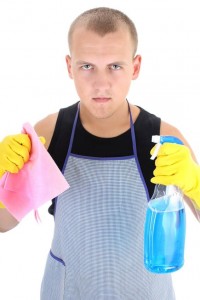 Ayo Omojola recently relocated to Mountain View, where he’s been putting long hours into Flypad. He’s the first to admit there were a few times when his apartment got kind of out of control. But when he went to find a professional cleaning service, he was struck by how piecemeal the process was, and wondered how he could research whether an agency was trustworthy without extensive contacts in the area.

“I wasn’t as concerned about price as being able to trust the people who came,” he said. “My biggest concern was trust.”

Though he’s still working full time on Flypad, an app that uses smartphone accelerometers to turn handsets into video game controllers, Omojola started working in his spare time on a service to find, rate and hire domestic cleaners, which he’s calling NowMaid.

Though the project is clearly a species within the genus TaskRabbit, which Omojola says he’s used before, a more direct inspiration was Uber, a svelte towncar service that lets its drivers rate riders, in addition to the other way around. Like Uber, Omojola plans to introduce NowMaid in very limited areas – San Francisco and New York, to start with – and listen closely to user feedback before tweaking and expanding the service.

“It’s a very personal thing,” Omojola said. “It only makes sense that if someone walks into your house and cleans stuff, we need a way to capture whether you felt good about it. If someone cleans your house and you only give them a single star, that’s a very important data point.”

At $99/hour for two maids, it’s not going to be the cheapest service around. Omojola plans to use referral discounts – $10 off for signing up, and another $10 if you invite a friend – to sweeten the deal.

One challenge facing the project is that some number of domestic workers in the United States are undocumented immigrants, who cannot lawfully work in the country. Omojola is currently researching whether working with a maid service that turns out to employ undocumented workers could introduce any liability for NowMaid.

“I’m not going to be doing this if I know I’m going to breaking the law,” he said.

Though he has high hopes for the service, which will launch this fall, he’s looking at it as a bootstrapped experiment at this point.

Seems like a worthwhile concept, but undocumented workers will prove to be an interesting issue. I’m wondering if going the “my friends” route would work. Perhaps there are people within my Facebook graph who would be willing to clean my apartment if I paid them too, and since I’m friends with them, I can (hopefully) trust them.