Update: Netflix has confirmed it has no intention to directly support anti-piracy bills like SOPA.

Netflix has launched a political action committee (PAC) this week to help support the fight against movie piracy. The new PAC allows the movie streaming giant to contribute up to $5,000 to federal candidates of its choice per election cycle, potentially lending support to politicians who back internet censorship bills like SOPA, which is now being called CISPA. 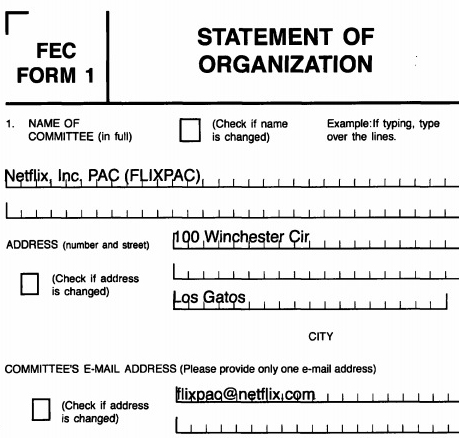 On Monday, Politico uncovered filings for the PAC, whose form was hand delivered and filed late last week. The document reveals that the PAC will be based out of Netflix’s main office in Los Gatos, California, and run by treasurer Christopher Libertelli, whom the company brought on nearly a year ago to function as its Government Relations Lead. Before joining Netflix, Libertelli worked in government relations at Skype for seven years.

The creation of the PAC could very well be a move to better relations with the Motion Pictures Association of America (MPAA), who authored and advocated controversial internet censorship bill SOPA, and whose members include many movie studios that blame Netflix for failing DVD sales.

Earlier this year, Warner Brothers, a noted member of the MPAA, doubled the delay time between its DVD release dates and Netflix availability from 28 to 56 days, and even began preventing customers from preemptively adding its titles to their DVD queue until a full month after the DVD had hit store shelves. After HBO began pulling wholesale discounts for the rental service, Warner Brothers did the same. Both companies are under the Time Warner media group.

Even if the move helps the company’s image with the MPAA, forming a PAC could potentially lead to support for those behind censorship bills like SOPA and PIPA, and could in the end be a dangerous endeavor for Netflix. GoDaddy.com both authored and publicly supported the bill, though changed its mind once more than 72,000 domains were transferred away from its service, including Wikipedia, whose network fully completed its transfer just last month. If the backlash late last year over companies like GoDaddy are any indication, Netflix will have to tread carefully as it doles out support for anti-piracy legislation with its newly formed PAC.