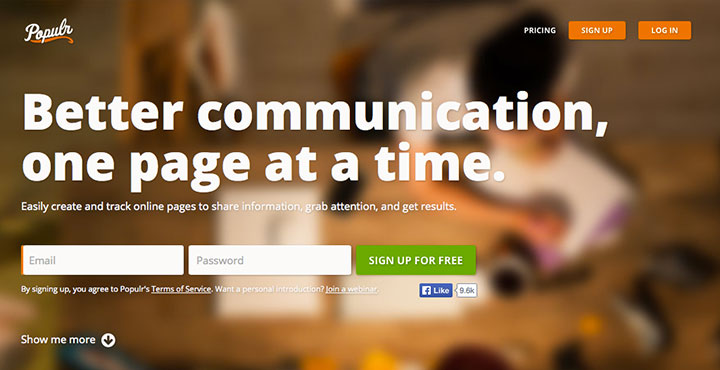 Some of the best startups are ones that make it easy to solve problems.  That’s how Nashville-based startup Populr began.  Nicholas Holland, who founded Populr, is also the co-founder of the agency CentreSource Inc., and like a lot of great agency beginnings, he spent his days pounding pavement, talking with companies, and landing big deals.

“So [Populr] was born out of a personal problem,” said Holland.  “Inevitably, I would be back at the office and write a five paragraph email and have four attachments to it, and often have to add a bunch of links to show off our work.  I thought God, this is terrible.  No one wants to read all of this.”

With that, he and his team started playing with the idea of a single webpage to accomplish his email, but be way more engaging with analytics for tracking opens and clicks.  And the results?

“So we started trying to manually build these, and it was rough,” laughed Holland.  “It took three or four days, and when it was all said and done it was great.  We had good results, but my team said if you keep making us do this, we’re going to kill you.”

Long story short, Populr is the solution that was born, making it easy for business professionals, sales team members, and general non-coder types to quickly put together beautiful one-page websites with the information they need to share.  And — Holland has been getting good feedback on the product, too. “What is consistent is they like our intelligent design engine,” said Holland.  “They like how easy it is to use. As we showed it to people, we position it as a sales platform, but we had marketers start to use it.  They said everything out there is too hard.”

Holland and his team describe Populr as a micropublishing tool.  It’s not a blog that requires a ton of consistent time, but it’s more than just your typical social media posts on Facebook and Twitter.  He explained, “I think what we stumbled upon was a larger trend that Facebook is turning all of us into online publishers.  We just didn’t know it. Because of that, all that’s missing is our awareness of platforms that let us go do this.  That’s what Populr aims to build; it wants to be the leader in a new space we call micropublishing.”

Populr has seen an influx of corporate users on the site, even some going as far as creating HR materials to help with the onboarding process.  In fact, employees from companies like Century 21, Dell, Sony Music, the American Red Cross and more are all utilizing this service in unique ways.

The team continues to improve the process.  When we talked, Holland shared that they’ve set their sites on adding payment capabilities and a mobile app for creating Pops (they’re already viewable on mobile devices).  “I think we’ll do an app.  First step, we’ll make it so you can use the mobile web, but an app because of its speed,” said Holland.  “And people are used to it.  We’re excited about that.  Just cutting down on creation issues and being able to take payment via Populr.  So if doing an event or selling an item, we want to make it so you can easily add a payment process straight to the page.” 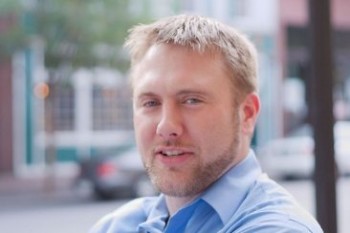 Being in Nashville, Holland also shared a bit about growing a startup in music city, sharing both the good and the bad.  “What’s been hard is I am looking for investors that are on the east or west coast for a variety of reasons, but I’d like to include Nashville investors, too,” said Holland.  “I’ve had multiple investors based on my location not want to talk to me.  I’ve had multiple investors like what I’m doing and think I’ve done a good job so far, but I’m still too far away from them and too early.  That is something that I’ll have to continue to contend with.  Nashville as a tier-two city does not instill the same confidence level as some of the larger cities like an Austin does.”

However, there are benefits for being in Nashville…

“A big benefit for Nashville, it’s been great to get client and channel partners.  I’m not fighting with 5,000 other startups similar to me to get someone’s attention,” said Holland.  “If you crave more than anything else [for someone] to pay attention to you, to listen and have a coherent conversation, Nashville has been fantastic for that.  I’ve had a lot of luck just being able to put in a phone call and get someone to take a look at what I’m doing.”

Holland also pointed out that Nashville is a leader in healthcare, and there is a lot of coastal money already there.  It’s just not as pervasive for tech startups… yet.  “We need a few large tech leaders to have a successful exit and be comfortable putting their own money here,” said Holland.  “I think we can grow to a point where east and west coast will pay attention. At the end of the day, traction will solve a ton of your problems.  If I can’t get someone to pay attention to me, it’s because I haven’t created enough traction that they can’t ignore it, and that’s on me.”

What do you think of Holland’s Populr and the up and coming startup scene in Nashville?  Anyone share a different experience?  Let me know in the comments, and check out some of the interesting Pops on their inspiration page here.