If one man has his way, the next up-and coming-technology hub in the US will be based in Elgin, IL, a city 40 miles northwest of Chicago. Lasse Ingebretsen is a native of Norway, but it is his adopted hometown of Elgin where he has set his hopes on attracting over 115 tech companies to relocate to by 2015.

The backbone of Ingebretsen’s plan is in the Elgin Technology Center (ETC), a not-for-profit organization he founded to help fledgling tech startups grow.

“We need to work on getting the best and the brightest out of their garages, attics and basements and to mentor them within a support system.”  said Ingebretsen. “We are attracting a broad-based community, from gamers, to IT security, programmers, and social media experts. We want to help them all to grow.”

In addition to offering tech startups low-rent office space the ETC offers a technical library, a training center, a conference room, and built-in mentorship and support groups for tenants and members. The ETC hosts regular networking events, seminars and lunches to facilitate collaboration between members.

The ETC opened in early 2011 on the second floor of the Elgin Tower Building (a historic office building in Elgin’s downtown that dates back to 1929). Amid extensive renovations that needed to be done to the over 6,000 square feet of space, member recruitment began. With a few favorable articles in local newspapers, the ETC’s membership quickly grew. 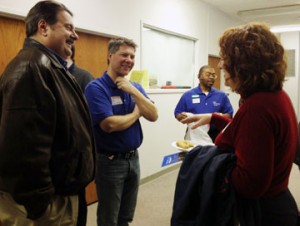 By the end of 2011, the ETC connected over 225 technical professionals, more than half of whom had founded a tech startup or were in the process of launching. By Ingebretsen’s estimate, approximately 25 tech companies have located in Elgin during the ETC’s first year. “We quickly went from a small advisory council to a rather large number of members. With the help of the articles and social media, we really exploded.”

One of the ETC’s first tenants was Jen Howver, founder of VOD Communications.

“The draw for me to participate was the affordable office space, the networking opportunities and the chance to interact with other tech and web companies who have a great potential to help each other,” Howver said. “It’s such a great benefit for small businesses like mine to have a physical space and the ability to interact with others.”

“Our primary goal here,” Ingebretsen said, “is to create jobs. Job creation is at the heart of it all. We need to take care of growing local jobs by attracting local businesses. I would rather see 1,000 small mom-and-pop companies come here than have one large company that employs over 1,000 people. The smaller companies offer more allegiance to the local economy, are more willing to give back to the local community. Our focus should be on local-sourcing, not outsourcing.”

With a mantra of “think innovation, think local,” it was a natural fit for the ETC to throw its weight behind tech startup Cityswipe, a company founded by ETC member Andrew Hartman, to launch the Elgin Community Rewards Card, a local customer loyalty program. Elgin Mayor David Kaptain helped with the launch in November 2011, as his was the honorary first swipe of an Elgin Community Rewards Card at downtown Elgin restaurant. More than 900 Elgin Community Rewards Cards have been registered, and are good for loyalty rewards from over 30 participating merchants. The merchants also contribute a percentage back into a community rewards fund. This is just one example of a grassroots effort by ETC members to foster economic development by driving more business into Elgin.

The focus for the ETC for the upcoming year will be on fundraising. With a grant writer in residence, the ETC has already landed a $10,000 grant from Motorolla Mobility to help fund the computer equipment needed for the center’s training facility. Future plans call for the training center to be used by members, rented by outside national training companies, and to attract local user groups of programmers and developers to hold their meetings.

For Ingebretsen, who started his own company (Castleway Tech) in the mid-1990s, his original motivation for launching the ETC remains intact. “After a while you become invested in your community. It makes sense for me to spend my time to help, because I want this community to be a better place. I love mentoring these companies, and I want to keep doing this as long as I can.”