Home > Blog > Mistash Wants You To Show The World Your Stash

Mistash Wants You To Show The World Your Stash 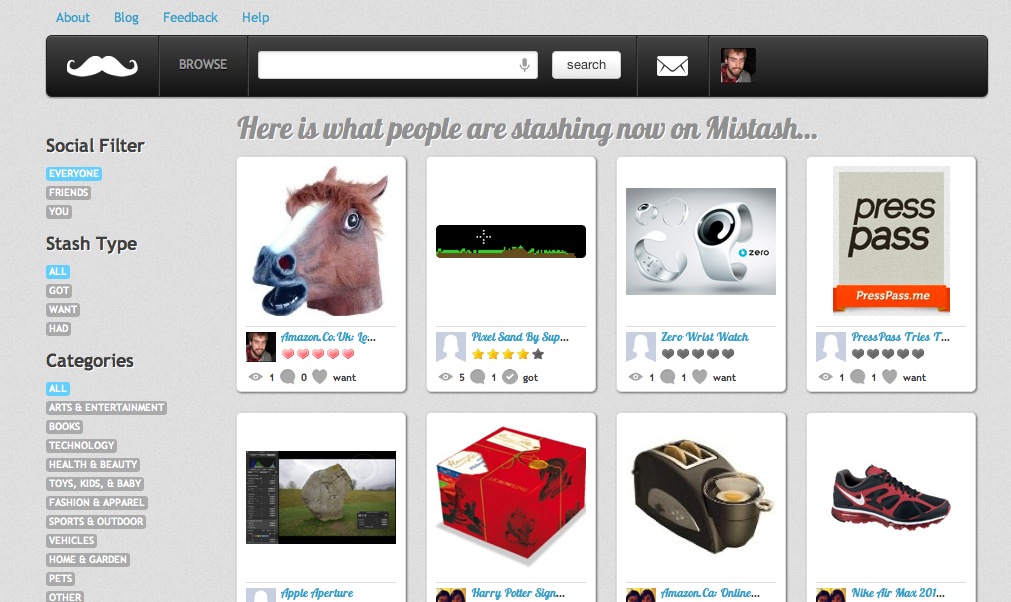 THE GIST: Mistash is an image-based service that allows users to show off their personal stash. Every user can put a mustache on items they own, want, or used to have. Users can browse items by filters of the entire community or just their friends, or in stashes organized by items they want or had. Practically anything can be stashed. The website even recommends you drag the mustache from the top left of their page to your to the toolbar of your favorite browser so you can stash anything you find across the internet. In general it’s a community of accumulated things, like digging through an endless internet garage sale. Nothing’s being bought or sold, of course, but it’s a real treat for those who just like to look.

BUSINESS MODEL: Webb admitted that even though Mistash is not currently “being monetized,” into the future there are plans to create revenue.

I don’t want to steal thunder from those announcements, but we are trying to stay away from affiliate links, affiliate advertising, and traditional display advertising for now. We want to maintain Mistash as a product sharing and discovery platform that is as close to word of mouth marketing as possible without businesses driving the agenda. Product sharing and discovery in most organic form possible online.

Mistash is laser focused around products. When users stash a product it is more than just interesting or whimsical, it’s a product that is very relevant and personal. Adding something to your stash is a declaration that you’ve experienced a product or want to experience it.

BACKSTORY: Webb began working on Mistash in 2011 at home in his garage–an office for the startup that he converted from his “mancave.” The company entered the Amazon Web Services competition, and even though they didn’t win Webb said the winning company “really motivated us to keep going. We felt like Mistash was as good of an idea as theirs, but their product was further along.”

INVESTORS: Mistash has so far been funded entirely by its two cofounders, though they’re currently looking for investors.

INSPIRATION: “The inspiration comes from a personal story about a tangled web of borrowed things. My friend David asked to borrow some extra paint that he somehow knew that I had. So I walked him into my garage cluttered with random tools and stuff, and I brought out some left over cans of paint that I had. A few days later David calls me and asks to borrow my shop vac. I didn’t realize it but he had surveyed my messy garage and remembered my shop vac. I told David that I wasn’t really using it and that he could come over and pick it up. Months go by and I’m getting a little upset that I haven’t heard from him about returning my shop vac yet. So I’m venting to my friend Jason about this situation and he gets really quiet. Then he says, ‘So… remember when I borrowed your tent 2 years ago? Yeah, I still have it.’ Personally, I had forgotten all about the fact that Jason still had my tent and felt bad that my story about David made him feel seemingly guilty of an equal or greater offense. A few days later I get a text message from my friend Ben that says, ‘Hey dude, I think you have my book ‘Good to Great’.  Can you bring it to dinner?’ To my horror, I realized that I had Ben’s book longer than Jason had my tent and way longer than David had my shop vac. We have so much stuff, we don’t even know what we have. The intent for Mistash was to have a place to share and keep our things organized amongst our friends. It’s always been products and friends and I think it will get even better as we work down our product road map.”

ON SOME OF THE STRANGER THINGS HE’S SEEN STASHED: “Today someone stashed a horsehead from Amazon in the UK. I had flashbacks to the Godfather Movie. Some really creative ones I thought were a girl in China stashed 6 pictures of her face doing different expressions and one of our friend’s stashed her husband. But for the most part, people have been stashing some really cool things like makerbots, Nikes and Jeremy Lin Jersey’s.”

ON THE THEME AND TERMINOLOGY OF MUSTACHES: “Once we thought of the concept of ‘your stuff’ = ‘your stash’ and then my partner came up with ‘Mistash’, which originally was ‘Me Stash’ that became ‘My Stash’. A mustache logo was the obvious choice.” 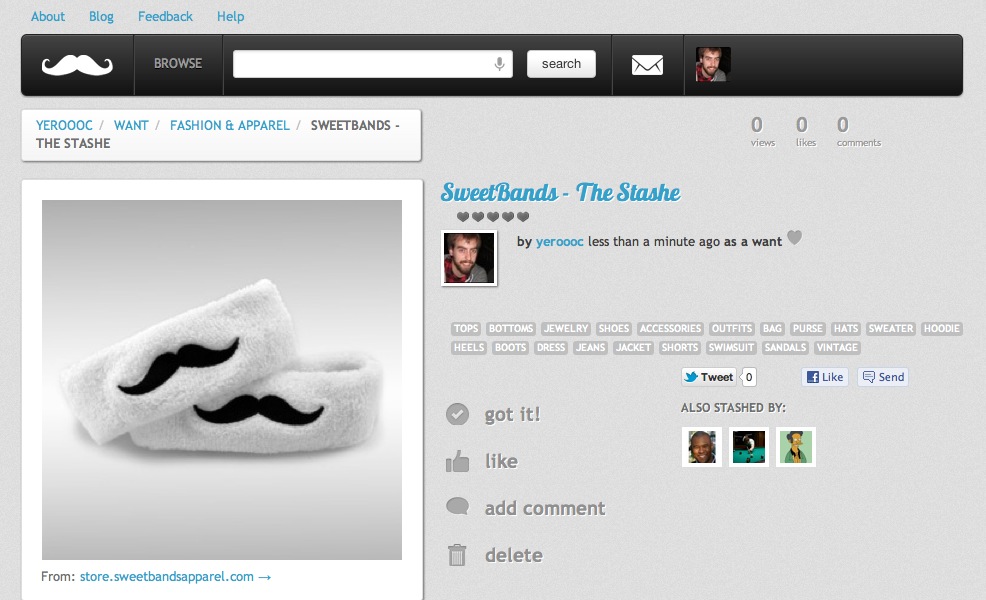 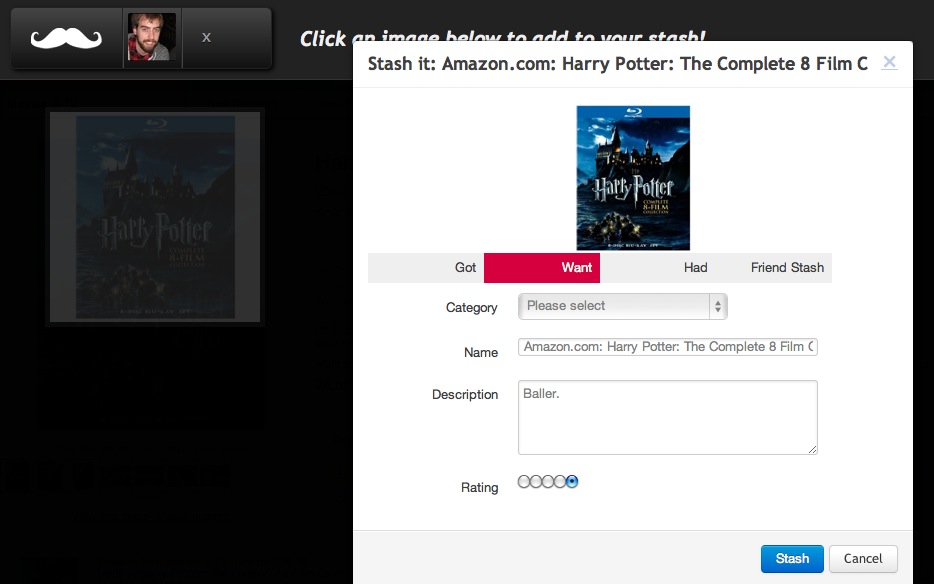 Get Linked To A Dermatologist With DermLink