Ohio dominates two top 10 lists when it comes to the best Midwest cities for startups while Chicago is still number one in the region.

The grand prize, “best startup city” is a rather subjective term, but here we will look at the results in a different light: what are the best-bang-for-the-buck cities for up-and-coming startups in the Midwest?

Miles ahead of other cities in terms of funding, number of startups and other variables, it is no surprise that Chicago was deemed the overall best city for startups in both rankings. The remaining top positions are taken by major metropolitan areas: Minneapolis, Saint Louis, Detroit, and an Ohio cluster of Cincinnati, Cleveland and Columbus.

Pittsburgh was also included since entrepreneurship, like any sprawling ecosystem, knows no geopolitical boundaries. 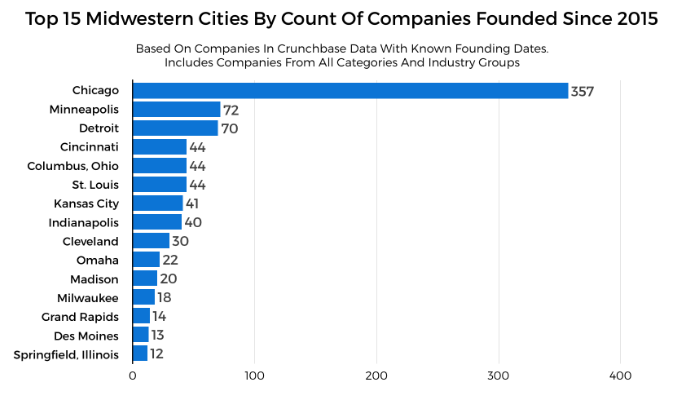 To find the hidden gems among this data we require a perspective that prioritizes balance. The M25 ranking has Chicago listed at the top—despite acknowledging that factors such as the high cost of living and large population place it at the very bottom when it comes to “how conducive the city’s economic environment is to attract and scale a business.”

Certainly there is money to be made in Chicago, but opportunities to innovate and grow also abound in more down-to-earth places.

With that said, welcome to Ohio. Led by Columbus and closely followed by Cincinnati and Cleveland, all in the top 10 in both rankings, this Midwest hub is a triple threat on Chicago’s supremacy.

Columbus is a capital city at the epicenter of a growing tech scene in an economy that has been called recession-proof, and that continues to attract smart and talented individuals. Home to venture capitalists focused on the region Drive Capital and LOUD Capital, startups have plenty of opportunities to seek funding within the state, although Chicago is only a two-hour drive away.

The 2017 Kauffman Index of Startup Activity lists these three cities among the most active; Cleveland in particular is pointed out as a city where “nineteen out of every twenty new entrepreneurs were opportunity-driven”, the highest in the country. The booming entrepreneurial system has yet plenty of space to grow, evidenced in the low startup-to-businesses ratio in Ohio.

New accelerators are popping up at an unprecedented rate in the area, thanks to increased competition in certain key sectors. As a consequence, Cincinnati and Cleveland made it to the top of the cost leaders list in for the Midwest in KPMG’s 2016 Competitive Alternatives report.

The Ohio triad has a cost of living about 25% lower than that of the Wind City and up to 40% that of California and New York. These lower costs translate to lower cash burn rates and operating costs, making nascent startups more resilient during their vulnerable initial stages, fostering a faster transition into profitability. Arguably, a smarter way to operate in a progressively globalized economy.