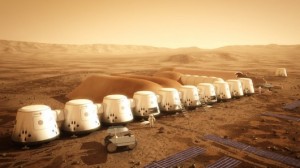 Projected image of the first human settlement on Mars. Source: Mars One Project

In what reads like a page out of science fiction, Dutch entrepreneur and co-founder of the Mars One Project Bas Lansdorp has his sights on sending the first humans to the Red Planet in 2023:

“Our plan to go to Mars has evolved quite a bit since we started. Right now, just about everyone we speak to is amazed by how realistic we have kept it. The next step is introducing the project to the world and securing sponsors and investors.”

Begun in January of last year, the project went public in May with its website launch, after carefully putting together a feasible plan, including covering all bases with backup from established space companies. The business model? Revenue will be generated from a reality show that will broadcast the daily lives of the first settlers on the Red Planet.

Here’s how it will work: The show will send four trained astronauts (trained at desert stations prior to the launch), and then send an additional, humanity-chosen astronaut to Mars every two years. Sending the first four astronauts will cost roughly $6 billion.

The stigma of poorly-done reality shows come to mind; Mars One aims to counter that. In its own words, “Imagine that we had video recordings of Columbus’ journey in 1492!” Viewers worldwide would have to chance to witness how the pioneers land, set up their camp, learn to work, cooperate in an unknown environment, and adjust to their new, permanent home.

What about safety factors? According to the project’s website, “Living there [Mars] is comparable to getting by on Antarctica, and provides similar challenges. However, the South Pole now has a number of very advanced, large research stations that boast a great deal of modern facilities that provide a good quality of life. These looked very different 50 years ago. The Mars settlement will develop in the same way.”

So, is this for real? Over the past year the project has panned out the details on many important parts of the mission, including what companies would provide the necessary infrastructure (all confirmed as feasible) and how it would all logistically come together.

What can we expect in the meantime?

First astronaut selections will begin. In an application process open to anyone, Mars One will narrow down its search to 40 candidates. These potential pioneers will then embark on a bootcamp session in the desert, mimicking Mars conditions.

The supplies mission, set to send 2500 kilograms of food and other cargo to the chosen habitat site, will launch in January and arrive in October.

A rover will land on Mars and scout the best terrain for setting up camp, aided by the millions watching via streaming video.

All colony components delivered on site, including living, life support, and supply units.

On September 14, 2022, Mankind will take its second giant leap with the first launch of a manned crew to Mars. Prior, vitals like water, oxygen, and athmosphere production will be ready. The vehicle set for a one-way ride will be assembled in low-orbit.

The landing! With the aid of rovers, our colonists make their way to the base camp and begin life on their new home planet.

In June the second batch of explorers will arrive, bringing new hardware and technology, as well as expanding opportunities for community growth and further Martian exploration.

While the project is not taking applications at this time, Mars One is set to open the flood gates sometime next year, and states that anyone and everyone interested is welcome to apply.

This should be on Kickstarter

This should be on Kickstarter

I’m totally in — if I live that long. Anyone up for trail running on Olympus Mons?

I am ready to do that for all mankind. Were i can sing in????