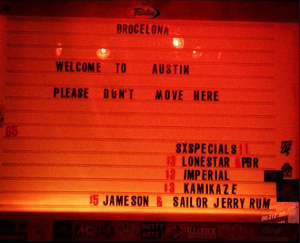 Thanks to @properfaceshelf for this gem!

Going into my first SxSW Interactive experience ever, I wasn’t exactly sure what to expect from a little trip down to Austin, Texas, from here in Chicago (and by little, I mean long and arduous – Edward Domain, of Tech.Li fame, and I endured a 24 hour drive through the night to get there – story on that another time).  Having just been to my first CES this year as well, I was curious to see the differences between these two nerd-fests.  It was clear on day one, however, that SxSWi is to ideas, what CES is to gadgets, and I knew I was in for a treat.

Since my day-to-day is spent in the world of marketing and advertising, my plans for panel attendance fell squarely in that field.  To be honest, I didn’t hit nearly as many as I was hoping – chock that one up to a few too many late nights – but I was still able fill my brain with a number of really interesting ideas to take back to the office (and share with you all, of course).  Out of the bunch, four of them had particularly stood out and have already influenced the way I work.

1. New applications for social media: Ambient social and social TV – two topics that people have grown either a love or hate relationship with since their seemingly omnipresence at SxSWi – has me thinking a bit more long-term.  My takeaway is that social media is on track to permeate all aspects of our lives; it’s essential that your social strategy can adapt to a variety of use-cases.

2. Transmedia is pretty damn cool: Everyone talks multi-screen, multi-platform, multi-whatever these days, but if you’re not feeding one screen’s content into the other, you’re doing it wrong.  There was a great panel with the folks from Top Chef called “How Transmedia is Changing TV,” basically bragging that they’re doing it right – and it’s true.  My takeaway is that adopting a multi-screen strategy goes far beyond just making sure you have presence across them all, it’s about leveraging the unique strengths of each and making them work in tandem.

3. Crowdsource your advertising: There was a great quote from a panel hosted by Dave Olsen, VP of Community at HootSuite, that put it very eloquently: “Customers are part of your culture. By inviting them to participate in your campaigns and community, you can speed progress, gain candid market insight, and have some fun!” My takeaway is that by allowing customers to get involved in SOME of your marketing campaigns, you can show sincerity and actually build a positive community around your brand.

4. Creating “products,” not just ads: Robbie Whiting, Director of Creative Tech at Duncan/Channon, hosted a panel that centered around a provocative statement he made early in the talk:  “Ads are decreasing in relevance to consumers. Agencies have to broaden their offerings to stay afloat. They have to go from making people want things to making things that people want.”  My takeaway is that building products and services that positively impact the lives of your target audience will take your messaging much deeper than even the most creative video or banner campaign. 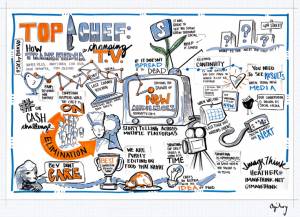 So there’s my big four.  There were a ton of other fascinating concepts wafting around Austin during SxSWi, but time is finite, so I was only able to catch so much.  It is clear, however, that SxSWi is a conference for the dreamers and I was honored to be smack dab in the center of it all.  In its eighth and biggest year, many claim that SxSWi has “jumped the shark” or “sold out.”  And while I can’t claim to have been there back when it was “still cool,” I can tell you I found immense value in the conference regardless of the naysayers, and I’m psyched to go back again next year!

PS – Robbie’s entire presentation is here on SlideShare (it’s where I got that fantastic zombie image).

New Cadillac Will Vibrate Your Ass When There’s Danger. No, Seriously