Graduate students Jay Silver and Eric Rosenbaum of MIT Media Lab have just wrapped up a round of funding on Kickstarter to bring a simplistic and creative device to consumers that will allow them to turn virtually anything into a touch sensitive button. The creators of the new USB connectible board, called MaKey MaKey, have raised more than 20 times the $25,000 they originally wanted to begin production.

The MaKey MaKey works easily with any current operating system and functions without any additional software to be recognized as a keyboard or mouse. The board uses alligator clip connections, which you can attach to any device that can conduct even the slightest bit of an electrical current. In one example, the creators turned bananas into piano keys, pairing the MaKey with a simple web app. 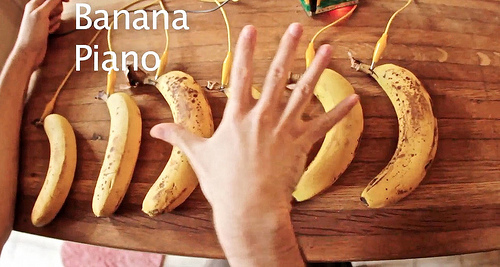 “We believe that everyone is creative, inventive, and imaginative,” wrote the team behind MaKey. “We believe that the whole world is a construction kit, if we choose to see it that way.”

The technology works by tethering a single input to your arm, which transmits an electrical signal that is completed when your finger touches the connected object, triggering whichever input its attached to on the board. On the Kickstarter page, MaKey’s creators use pencil drawings to control a game of Pac-Man and alphabet-shaped soup noodles to type “I luv MaKey MaKey” onto a computer screen.

On its front face MaKey has inputs in a gamepad fashion, where connections to objects can result in directional movement or basic button presses. On the back of the board, there are even more connection possibilities, including keyboard inputs for each letter. MaKey is aimed at being incredibly easy for beginners to get started, but complex enough not to stifle the creativity of more experienced users.

After viewing all of the really unique and creative ways people are already using the MaKey, it’s safe to say that with the success of the Kickstarter fund – which closed with more than $560,000 – we’ll be seeing a lot more mind-blowing uses for the quirky board once it hits the market.